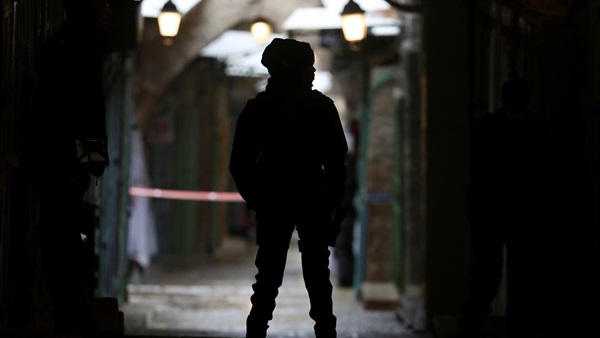 A 14-year-old Palestinian girl stabbed an Israeli woman on Wednesday morning in a contested East Jerusalem neighborhood, police said, in the fourth lone wolf attack in Jerusalem in three weeks amid fears of a new wave of violence.

The victim, Moriah Cohen, 26, was walking her children to school in the contested neighborhood of Sheikh Jarrah when she was stabbed in the back with a nearly 12-inch knife by the Palestinian teenager, a resident of the area, according to Israeli police reports. Haggi Mazeh, head of the Hadassah Mount Scopus trauma center, where Cohen was treated, said the victim arrived with the knife still in her back.

Cohen and her family are among the few Jewish residents of Sheikh Jarrah, where a pro-settler Israeli organization has been attempting for years to evict Palestinian residents.

The alleged attacker, identified by authorities as Nofoud Jad Araf Hamad, fled the scene but was apprehended several hours later at the nearby al-Ruda school for girls. Israeli police arrested the school’s principal, another staff member and a student who is a relative of Nofoud. They also raided Nofoud’s home and took her mother into custody.

“The stabber is our neighbor,” said Dvir Cohen, the husband of Moriah Cohen. “She lives right in front of us. She followed her, got close to her, then stabbed her.”

He said that 11 molotov cocktails have been thrown at the Cohens’ house and that they hid their menorahs during the Jewish holiday of Hanukkah. But he said it was the family’s “mission” to continue to live there.

“We will not allow terrorism to raise its head,” tweeted Israeli Prime Minister Naftali Bennett.

Nofoud’s family is among the dozens of Palestinians facing eviction in Sheikh Jarrah, a flash point in the Israeli-Palestinian conflict, where daily confrontations between Palestinian protesters and Israeli police led to an escalation in violence in the Gaza Strip in May.

Historians say that a small Jewish community existed for thousands of years in the neighborhood, around the tomb of the ancient Jewish high priest Shimon Hatzadik, although the community fled the area when the city was divided in 1948 between Israel and Jordan.

Wednesday’s stabbing was the latest in a string of attacks since mid-November. Only one of the assailants was found to be formally tied to Hamas, the Palestinian militant group that runs the Gaza Strip.

On Monday, a 16-year-old Palestinian attempted to hit soldiers with his car at a West Bank checkpoint and was fatally shot at the scene, authorities said. On Saturday, a 25-year-old Palestinian man stabbed an ultra-Orthodox man in the neck and upper body. He was fatally shot by Israeli police while lying on the ground. Police later said they suspected him of wearing an explosive device, although none was found.