The U.S. far right has a curious affinity for the Taliban 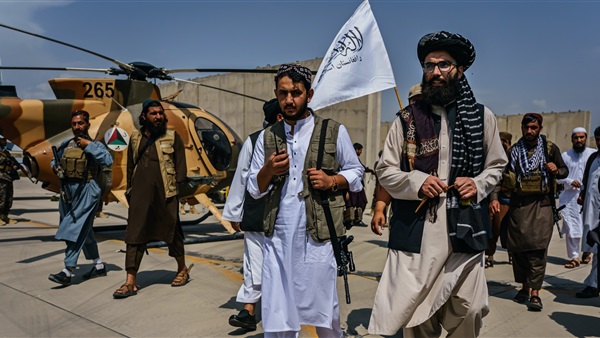 For some onlookers, the debacle of the American withdrawal from Afghanistan constitutes an almost cultural defeat.

In the words of NBC News’s chief foreign correspondent Richard Engel, the fall of the Afghan government and the desperate American evacuation represented “the worst capitulation of Western values in our lifetimes” — a statement that earned no shortage of derision from critics of the United States’ costly, bloody interventions. Yet others shared his sentiment. Speaking to Sky News, a former senior British intelligence official echoed this idea of a civilizational blow: “This marks the end of an era of Western liberalism and democracy that started with the fall of the Berlin Wall,” the former official said. “It is a defeat of Western ideology.”

But among some circles on the far right, the very idea of the Taliban engineering a Western defeat elicited a kind of glee. After all, an avowedly illiberal, somewhat nationalist militia had outfoxed the modern American war machine and eventually overwhelmed the enfeebled U.S.-backed Afghan government. The supposed ideals wrapped up in two decades of U.S.-led nation-building — from inculcating republican democracy to expanding women’s rights — collapsed in the face of a tribal resistance movement more rooted in the country.

“What went wrong in Iraq and Afghanistan was, first and foremost, the ideas in the heads of the people running the show,” tweeted Yoram Hazony, an Israeli writer who is one of the leading intellectuals of “national conservatism,” a brand of right-wing nationalism that’s reshaping the Republican Party. “Say its name: Liberalism.”

Analysts point to a somewhat long-standing tradition of white supremacists voicing admiration for Islamist extremists, no matter their anti-Muslim bigotry. In its weekly bulletin on far-right extremists, the SITE Intelligence Group noted that some people saw the Taliban’s victory as “a lesson in love for the homeland, for freedom, and for religion,” while it was also tracking “increasingly violent rhetoric about ‘invasions’ by displaced Afghans.”

On various social media platforms, including the 4chan message board that is popular with the far right, users crowed over the perceived lessons learned. “These farmers and minimally trained men fought to take their nation back from [Western neoliberals],” wrote a poster on a popular Telegram channel associated with the Proud Boys, a far-right group with a history of violence whose members participated in the Jan. 6 storming of the U.S. Capitol. “They took back their government, installed their national religion as law, and executed dissenters. Hard to not respect that.”

“The Taliban is a conservative, religious force, the U.S. is godless and liberal,” wrote influential far-right operative Nick Fuentes, who leads a white-supremacist group and counts at least one Republican congressman as an ally, on his Telegram channel. “The defeat of the U.S. government in Afghanistan is unequivocally a positive development.”

The Taliban’s “legitimacy,” in this view, is mostly about the sort of humiliation its success poses to the Biden administration and its supporters. “The far right, the alt-right, are all sort of galvanized by the Taliban essentially running roughshod through Afghanistan, and us leaving underneath a Democratic president,” Moustafa Ayad of the Institute for Strategic Dialogue, which tracks extremist groups, told New York Times columnist Michelle Goldberg.

There are also deeper narratives at play. In the first week of the Taliban’s takeover, Fox News host Tucker Carlson, arguably the most influential right-wing voice in the United States, cast the militants’ victory as a repudiation of liberal norms around gender equality. “It turns out that the people of Afghanistan don’t actually want gender studies symposium,” he said.

“They don’t hate their own masculinity,” Carlson went on. “They don’t think it’s toxic. They like the patriarchy. Some of their women like it too. So now they’re getting it all back. So maybe it’s possible that we failed in Afghanistan because the entire neoliberal program is grotesque.” (Carlson seems to have misused the word “neoliberal,” which more accurately applies to a set of laissez-faire economic principles, not social or cultural ones.)

Carlson, to be sure, does not want Afghans coming to America. For many on the far right, the celebration of American liberalism foundering in a foreign land is accompanied by a belief in the inadmissibility of Afghans into the United States. “So first we invade, and then we’re invaded,” Carlson said, scaremongering over the current influx of thousands of Afghan refugees.

Carlson’s animus is part of what administration officials have described as a growing chorus of anti-refugee sentiment on the right that has followed the Taliban’s capture of Kabul. CNN obtained the details of a recent call between John Cohen, the head of the Department of Homeland Security’s Office of Intelligence and Analysis, and local and state law enforcement.

In the call, Cohen said his agency, in its monitoring of far-right groups, had seen both an uptick in invocations of the “great replacement” — a white-supremacist conspiracy theory that liberals are “importing” foreigners to undermine the country’s white majority — and praise for the Taliban’s success from those who call for a new civil war within the United States.

“There are concerns that those narratives may incite violent activities directed at immigrant communities, certain faith communities, or even those who are relocated to the United States,” Cohen said on the call.