The Muslim Brotherhood in Algeria ... attempts to return to the political scene 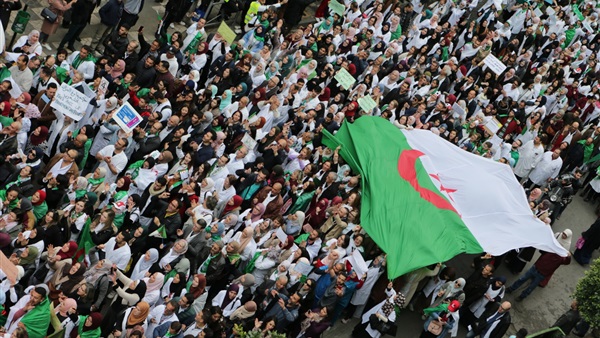 There is a close relationship between the role of the mother Brotherhood in Egypt and the existence of an its affiliated organization in Algeria, as the Brotherhood was formed in Algeria by the arrivals from Egypt and Syria.

Therefore it is difficult to determine an official date for the actual beginning of the organization of the Muslim Brotherhood in Algeria, but many researchers associate a prominent political event in Algeria’s history with the emergence of the Brotherhood’s organization in it.

The 1976 pact showed an emerging organization called “Almohads”, and issued a statement entitled: “Where you will go Boumediene?

Mohamed Bouslimani, who is the first founder of the Brotherhood in Algeria, talks about this period, saying: “In the year 1975, what we call in Algeria appeared in the law of the agricultural revolution, and was preceded by another law in 1971 called the Family Law, so the group moved to show the Algerian society the mistakes and show the Algerian society that There is a conspiracy against the family not in the direct way, but in the legal way, and immediately after that was the elections of the Charter and the constitution, this Charter and the constitution that we were able to reveal that the one who made it and the hands that I wrote, and the thought that made the event has nothing to do with Islam, and has nothing to do with even Algeria and in it About us R. of Jewish origin, because after that we got six letters of thanks from John Polsat, I think that he was the general manager of the Communist Youth Movement in Europe or something like that, and he had a close relationship and I do not say goodness with Boumediene, so I sent to Boumedienne six letters of congratulations on the success of Constitutional articles in Algeria that worked to spread and perpetuate communist thought.

He continued, "And during this period the movement was moved by a statement mentioning some points from it, including our call for the Algerian Muslim people to reject the text of the petition of the Charter and rebellion against the ruling regime, and to demand the application of Islam as a Sharia and method.

The discussions of the National Charter in Algeria in 1976 AD are the first political station in the history of the contemporary Islamic movement there, especially the post-independence Muslim Brotherhood, and it seems that the visions differed between its first frameworks in the stance on the Charter and its discussion, as the part of the Islamic movement preferred the method of popular participation In what are available from the means and platforms, in order to discuss the provisions of the National Charter and to introduce the necessary amendments and upgrading the popular style, while Mahfouz Nahnah and those with him preferred the method of public opposition, which led to the symbolic announcement of the existence of the "Almohads" organization, which is closer to the regulation imposed by The statement from Being an organization already existed on the ground, because the statement needed a signature to be attributed to some party, either it was signed in the name of individuals, and this was prevented by security reasons; therefore, they resorted to the option of signing in the name of a symbolic body called “Almohads” identifying with the Almohad movement, led by Mahdi bin Toumart, founder of the ancient country in North Africa.

Whatever the explanations, the "Almohads" formation did not continue, as the most prominent of its elements were quickly arrested, led by Sheikh Mahfouz Nahnah, who was sentenced to fifteen years in prison, after resorting to a demonstration method by cutting the phone columns in the Blida region as an expression of this emerging protest organization against The approval of the National Charter, as well as the arrest of Sheikh Muhammad Buslimani, and the charges ranged from disturbing public security and attempting to stage a coup and forming a banned group.

During this period, Sheikh Mahfouz Nahnah was in contact with some teachers from the Muslim Brotherhood in Blida, and they recommended it to the Brotherhood’s Central Command, which he sold while performing Umrah the same year in which he was arrested, i.e. in 1976.

Although it was difficult to document this account accurately, but Kuwaiti researcher Dr. Abdullah Al-Nafisi, who is familiar with the affairs of the Brotherhood, considered the decisive stage in the history of the Brotherhood between 1973 and 1977, which is the stage of organizational vacuum, and that the actual movement towards the countries by the Brotherhood began his first attempts at In 1977, when Nahnah was kept in prison.

However, it is established that the Muslim Brotherhood organization in Algeria did not actually move until after the release of the two sheikhs Mahfouz Nahnah and Muhammad Buslimani in 1980, with a blanket amnesty from President Al-Shazly bin Jadid.

Thus, it can be said that the actual formation of the Muslim Brotherhood in Algeria was delayed until the early eighties, and some sources define the official start of the work of Mahfouz Nahnah and Muhammad Buslimani, under the umbrella of the Muslim Brotherhood - the wing of the international organization in particular - after the return of Sheikh Buslimani from Tunisia, in which he participated in a movement conference The Islamic trend in the early 1980s, led by Sheikh Rashid Ghannouchi. The latter seized the opportunity to have Algerian guests to attend the conference, so they were offered an official link with the International Brotherhood organization, and received a response from some of those present, including Sheikh Mohamed Buslimani.

Sheikh Muhammad Buslimani himself is documenting this stage when he says: "We got out of prison and found that the Islamic tide is a stream, and that the Islamic movement took the popular and mass dimension before the Algerian Muslim Brotherhood took shape in the form that it appeared in the mid-eighties, due to the fact that the historical symbols of the Brotherhood in Algeria (Nahnah / Buslemany) was in prison throughout the first tide of the Islamic trend, and by the fact that the international organization of the Brotherhood with its central leadership in Cairo and the operation in Switzerland led by Said Ramadan did not take a practical and stable organizational dimension until the early 1980s.

He added: "Sheikh Abdullah Jaballah insists that he is the first to raise the slogan of the Muslim Brotherhood in Algeria, and as he put it:" We are the first to know this name and who was imprisoned because of him. "Sheikh Jaballah's relations were close to some Islamic professors from the Syrian Brotherhood; That is why he was known in his early propaganda propaganda for adopting the thesis of Sayyid Qutb on the intellectual level and the writings of Said Hawa (the Syrian Brotherhood’s view) at the organizational level. Prison led to a rivalry between the two wings.

Initially, Sheikh Buslimani’s efforts tended to unify the ranks and gather the wings of the one idea, to get out of the crisis of legitimacy and the official representation of the Brotherhood in Algeria. Roles and defining the concept of "pledge allegiance". Are there two sales in one organization? The dispute over the terms and conditions of the leader of the organization - this organizational unit has not taken place.

And soon Sheikh Jaballah lost the right to formally represent the Muslim Brotherhood even after he contacted Cairo and asked the leadership of the international organization for the Brotherhood to review its position with the person who represented it in Algeria, and the international organization finally decided the position in favor of Mahfouz Nahnah in 1985-1986, the period during which the late Mahfouz Nahnah officially moves under the slogan of the Brotherhood and calls for the sale of the group's central leadership in Cairo.

Abd al-Rahman Saidi (deputy head of the Movement for a Peace Society in charge of advocacy, culture and education for the Muslim Brotherhood in Algeria) said: “Brotherhood thought was widespread in the Islamic world at the beginning of the 1940s, when most of the Arab and Islamic countries were under occupation and colonization, and the Brotherhood’s thinking was in the apartment of the politician It calls for independence and liberation from all foreign sultan, so the Brotherhood continues with their intellectual and political vision with various political and cultural forces in the Arab world from the point of reference of Islam, and according to my historical information based on testimonies of personalities in Algeria and abroad that the Brotherhood pain Salman was continuing with her political and material support and her embrace of some of the Algerian revolutionary personalities, and her continuous relations with the national movement and the Association of Muslim Scholars, and some leaders of the national movement were meeting and meeting at the general headquarters of the Muslim Brotherhood in Cairo, and the "Wortani virtue" who was succeeding the mentor Hassan al-Banna in some of his lessons And it works in coordination with the Brotherhood in the issues of the Islamic nation, and after cultural and educational communication between Algeria and Egypt, especially the scientific missions that came to Algeria according to supporting and supporting the independence of Algeria, so there was communication and cross-fertilization between the Islamic reformist thought The Algerian who was from patrons and preachers, Sheikh Mahfouz NAHNAH and the remnants of leaders of the Muslim Scholars Association, headed by Malik bin Nabi thought in the Muslim Brotherhood and thereby strengthen Algeria this dimension and Sheikh Mahfouz was able NAHNAH to establish the Muslim Brotherhood movement in Algeria. "