Iraqis stuck in the middle in battle for Middle East influence 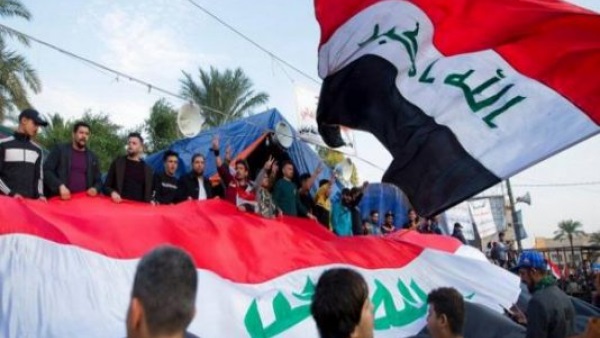 The lyrics from a song by a Scottish folk-rock band that was popular several decades ago might seem like an unusual and absurdly specific cultural frame through which to view the tensions that have engulfed the United States and Iran in recent times.

But for Iraqis, as evidenced by their social media posts, protesters and statements and testimony from humanitarian aid groups, religious figures and political analysts, the 1973 Stealers Wheel song, "Stuck in the Middle with You," makes a kind of perfect sense.

Ever since the Trump administration exited the nuclear deal between Iran and world powers, reimposing sanctions and pursuing a "maximum pressure" policy on Tehran that has left the country economically and diplomatically isolated – culminating this week with an Iranian missile attack on two bases in Iraq that house U.S. troops after the Pentagon killed a top Iranian commander in a drone strike there – Iraq has been at the center of an intensifying tug of war between Tehran and Washington, according to Osamah Khalil, a historian of U.S. foreign relations and the Middle East at Syracuse University.

An American defense contractor was killed in a rocket attack on U.S. troops in late December in the northern Iraqi city of Kirkuk. Washington blamed an Iranian-backed group for the assault.

The U.S. hit back with airstrikes along the Iraq-Syria border that killed 25 fighters from Kataeb Hezbollah, a non-state armed militia that is part of the Iraq-based Popular Mobilization Forces, supported by Iran.

Iraqi anti-government demonstrators flash the V-sign of victory during a protest in the Shiite holy city of Karbala in central Iraq on Jan. 10, 2020. Protesters also chanted anti-U.S. and Iran slogans.

Shortly afterward, angry crowds of pro-Iranian demonstrators stormed the U.S. Embassy in Baghdad, chanting "Death to America." Washington said the siege was orchestrated by Iran's Gen. Qasem Soleimani, who the Pentagon subsequently killed in the drone strike near a Baghdad airport along with Abu Mahdi al-Muhandis, the leader of the Popular Mobilization Forces.

According to his online and social media profiles, Al-Shakeri is from Baghdad and works in development, helping to coordinate regional cooperation programs across Arab states. He could not be reached for an interview.

Another twitter user, "@mendlusi," shared a video by an Iraqi journalist that appeared to show an Iraqi man in Baghdad "crying over the pain that Iraqis have suffered at the hands of the government, foreign governments and militias."

Over the last few months, more than 400 Iraqis have been killed and almost 20,000 injured, according to the United Nations, in protests in Baghdad and cities across Iraq.

Among their demands: an end to widespread corruption that has precipitated a dysfunctional economy, rampant unemployment and ineffective governance.

They also want to see a halt to the outsize influence of Iraq's armed Shiite militia groups, such as the Popular Mobilization Forces, that are closely aligned with Iran. Iraq's Prime Minister Adel Abdul Mahdi, who has already resigned and is in a caretaker role, was due to meet with Soleimani on the day the Iranian commander was killed in the U.S. drone strike, according to Mahdi's own admissions to his country's parliament.

After Soleimani's killing, Mahdi, a Shiite who has close ties to Iran, led and won a non-binding vote in Iraq's parliament that called for U.S. troops to be expelled from Iraq. On Friday, Mahdi asked U.S. Secretary of State Mike Pompeo to start formulating a plan for the U.S. withdrawal of troops. The Trump administration rebuffed the idea.

"America is a force for good in the Middle East," said Morgan Ortagus, spokesperson for the State Department. "Our military presence in Iraq is to continue the fight against (the Islamic State terror group) and as the Secretary has said, we are committed to protecting Americans, Iraqis and our coalition partners," she said.

Still, thousands of Iraqi rallied across the country Friday in anti-government protests where they also chanted criticisms of both the U.S. and Iran.

"Iraq has been suffering from proxy wars for decades; they have torn our country apart," said Bashar Matti Warda, a Chaldean Catholic cleric and the current Archbishop of Erbil, in Kurdish Iraq. Chaldean Catholicism which originates in the Church of the East, is a form of Christianity that is found in Iraq, Iran, Lebanon and other places in the region.

Sajad Jiyad, managing director of Al-Bayan Center, a Baghdad-based public policy think tank that focuses on issues related to Iraq and region, said that Iraq "does not want to be in one camp or the other. Iran will always be our neighbor. But we recognize that the U.S. is a superpower."

Jiyad said that prior to the implementation of the Trump administration's "maximum pressure" Iran policy his country was not as caught in the middle between Tehran and Washington and that anti-Americanism has increased.

"Our politics has also taken on a strong anti-American voice," he added, referring to the vote in Iraq's parliament to try to push American forces out of the country.

While the war in Iraq officially ended in 2011, when former President Barack Obama ordered the withdrawal of U.S. combat troops, 17 years after the U.S. invasion that toppled the government of Saddam Hussein, Iraq remains in a fragile state.

About 5,000 U.S. and coalition troops have been redeployed to the country to combat the Islamic State terror organization, an extremist Sunni group that capitalized on the chaos unleashed in Iraq by the U.S. invasion and, later, the civil war in neighboring Syria.

Across the broader Middle East region, the U.S. has more than 62,00 troops deployed in various countries ranging from NATO member Turkey to the tiny Gulf state Bahrain.

Iraq and Iran share almost 900 miles of borders and Iraq is heavily dependent on Iran for its energy supply. The many armed militias in Iraq are often closer to Iran than to the Iraqi government – making it potentially perilous to alienate Tehran. A U.S. withdrawal could pave the way for a resurgence of the Islamic State group.

It would be a "gift to ISIS," Sen. Christopher Murphy, D-Conn., a member of the Foreign Relations Committee, said, using an acronym for the terror organization.

Washington's current with Iran crisis has put Iraq "in the eye of the storm" at the worst possible moment, said Abbas Kadhim, head of the Atlantic Council’s Iraq initiative and a former Iraqi diplomat.

The current prime minister is on his way out of office, and the current government is operating with "truncated authorities," Kadhim noted at a foreign policy forum in Washington on Thursday. The population is divided, and leaders are struggling to chart a path forward amid a political crisis.

Now they’re dealing with a cycle of confrontation between the U.S. and Iran that has left Iraq torn between two key allies, he said.

Andres Gonzalez Rodriguez, the Iraq country director for Oxfam, the humanitarian group, said in an emailed statement that due to the recent uptick in Iran-U.S.-related frictions in Iraq "we have had to suspend work in three locations where we were delivering cash aid to people in need of help. If we have to continue the suspension for a few weeks more, 100,000 of the most vulnerable people will be affected."

Rodriguez said Oxfam, whose aid reaches over a million people in Iraq, specializes in water and sanitation, emergency food, cash and gender programs and protection work.

Early on Wednesday local time, Iran launched more than a dozen ballistic missiles at bases in Iraq hosting American and other foreign troops, in what appears to have been a carefully calibrated response to the killing of Soleimani. No one was killed in the strikes.

President Donald Trump said Iran "appears to be standing down" and suggested the U.S. and Iran could work toward a new nuclear deal while cooperating against militants. Few foreign affairs experts see that as a likely outcome of the increased frictions.

Jiyad, of the Al-Bayan Center, said that Iraq understands that the U.S. can be a helpful partner in the region in terms of fighting the Islamic State terror group, "but we don't want to be part of a political game where we are either pro-Iran or pro-U.S. The most important thing for us is to keep good relations with all countries."

Saeed Jamil al-Hadidiyah lives near the area where an Iranian bomb fell in Bardarash, Iraq.

Still, for Saeed Jamil al-Hadidiyah, 59, and his family, who live on a farm where they work as sheepherders near where one of the missiles that Iran fired on a base in Kurdish Iraq landed, such political arguments are meaningless.

"We don't understand why Iran is attacking us. What did we do to them," he said Thursday as he showed USA TODAY the damage sustained to his house.

The missile landed about 1,600 feet from the home he shares with 14 other members of his extended family. The youngest is a 6-month-old baby. None were injured in the attack but the home sustained damage to the roof and some windows were shattered .

"We know there's tensions between Iran and the U.S. but why are they shooting at us?"