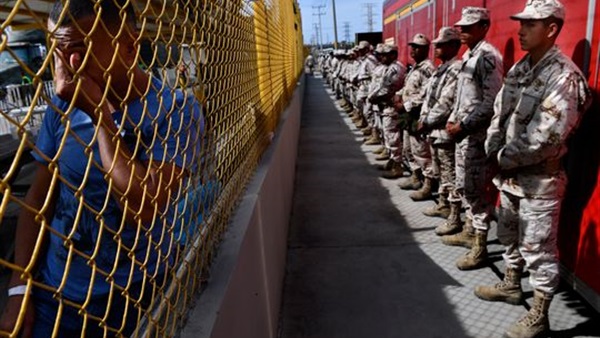 Freddie Valdez doesn’t have a specific location in mind. Anywhere in the U.S. is better than home.

The Honduras citizen left home more than 20 days ago. He walked, hitchhiked and eventually got on a bus to make his way to Piedras Negras, directly across the Rio Grande from Eagle Pass, Texas.

He was part of the caravan of 1,800 migrants seeking asylum Thursday. They arrived at the border town Monday.

“I want a better life for my family, back home the situation was bad,” he said. “It was too dangerous.”

He plans to wait his turn, as long as it takes to get his permit to get into the U.S. Then he will send for his family to join him. U.S. officials said Wednesday they can process about 16 asylum seekers daily.

Honduras is plagued with violent crime, and its murder rate remains the highest in the world despite being drastically curbed in recent years, according to Human Rights Watch.

Throughout the day, buses were loaded with people opting to self-deport back to Honduras.

The fenced compound holding the migrants is about a 20-minute drive from the border and was once a factory. Mexican police with riot gear stand watch along the perimeter.

Some migrants, mostly the men, stand at the barricades, some sleep on blankets or chairs while kids do crafts at a nearby table or play soccer and other games in the courtyard.

Earlier in the week, on the U.S. side of the border, about 500 Texas state troopers, 50 reserve deputies from across the state and 250 active duty military were dispatched to the area around Eagle Pass in response to the influx of migrants in Piedras Negras.

Alvaro Miranda held up his phone showing a photo of injuries, his arms bruised and beat from a confrontation with a gang in El Salvador.

Like others, he joined the caravan to seek asylum for a chance to find a better life, he said in Spanish to a translator.

The caravan started in Honduras, but along the way Guatemala, Nicaragua and El Salvador citizens joined. Miranda said the caravan was organized by someone they knew as "Carlos," but he was deported before they reached Piedras Negras.

Miranda said they came to the Texas border instead of northern Mexico ports like Tijuana because they felt there were likely fewer migrants in Piedras Negras, making it a safer port to seek asylum.

Miranda said the migrants didn’t know they would be detained for processing for so long.

He said one of the problems is the lack of communication and orderly way to process the migrants. Each person was given a wristband with a number, yet the immigration officers are not calling people in numerical order, he said.

“I’m number 897 and I will wait patiently if I knew there were 897 before me, but it seems to be who woke up first in the morning or a random person they pick,” he said.

In El Salvador, Miranda worked long hours for low pay. When he finally got paid, he would turn a corner and run into organized criminals who would take his money. He sustained his injuries during such an encounter.

Leaning in on the yellow fence, the men standing with Miranda agreed. Going back is not an option for them. They agreed it's worth to wait for asylum.

There to assist with humanitarian efforts, a team with Doctors Without Borders continue to assess the needs of the migrants at the shelter. The team has carried out mental health consultations mainly so far.

A loud speaker crackled in the compound, and lunch was announced. The men dispersed to stand in long lines to receive a plate with chicken, beans and rice.

“We come in peace to look for work and help our families, we didn’t set out with the idea of violating the law,” Miranda said. “We are workers and we want a better life.”