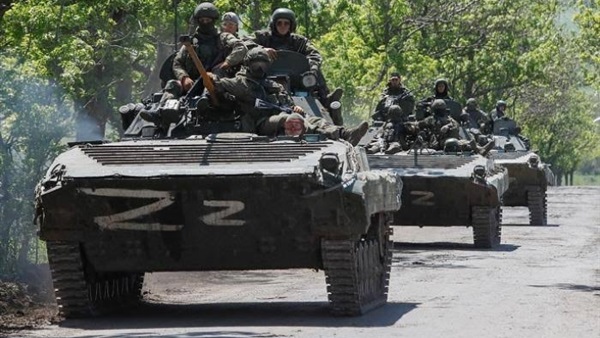 The Ukrainian special forces soldier stood alone on the ruined bridge, looking out through the drizzle over the Siverskyi Donets river. A week ago Russian soldiers had controlled the opposite bank, firing on Ukrainian troops from the abandoned holiday camps and forests that line the waterway.

Now, after a lightning advance that won Ukraine back more than 1,000 square miles of territory in the northeast, it was deathly quiet but for the boom of shelling by the Russian border, 11 miles away.

“We broke the myth of the Russians being invincible,” said the soldier, who gave his name only as Alex. “And, I mean, we’re good fighters, but we did it because of the weapons we got from the West. The targeting was so accurate. The Russian soldiers left everything when they ran.”

For mile after mile behind him the land was almost deserted. Heavily mined roads strewn with discarded Russian uniforms and military equipment sliced between fields studded with the white tail ends of rockets. The stink of decomposing bodies lay thick in the air.

Russia launched its invasion of Ukraine with the aim of taking control of an upstart former Soviet dominion, and of showing its power and military might to the world. Instead, seven months into the war, they have been pushed back from the gates of Kharkiv, Ukraine’s second city, towards their own border to the north, and to the southeast.

Their failure is written in every Russian camouflage jacket that lies by the roadside, in the twisted remains of burnt out armoured vehicles painted with the letter Z — the symbol of what Putin calls the “special operation” — and in the new quiet that has stolen over golden autumn evenings in Kharkiv itself after half a year of bombardment.

Across the reclaimed territories, civilians are emerging from the occupation with stories of brutality and repression. Last week Ukrainian officials announced that 445 bodies, some of them civilians, some military, had been found buried in a forest near the city of Izyum, which was reclaimed by Kyiv’s forces last week.

Ukrainian soldiers, eyes puffy with exhaustion, tell of being pounced on by jubilant locals as they liberated towns and cities, offered pancakes and brandy and being kissed again and again by every woman they saw.

It is not the full picture, though. While many welcomed the Ukrainian soldiers, others were sorry to see the Russians go. Those who were most devoted to the Kremlin’s worldview left with the occupying forces, returning with them to Russia. Others stayed, disappointed with the Ukrainian advance but unwilling to leave.

“Honestly, it was 50-50,” said Alex, the special forces soldier by the bridge. “Some cheered, but some people were not happy to see us. They said, ‘why did you come?’ They still support Russia. They’re brainwashed by their propaganda.”

As he spoke, a young woman with pink lipstick landed on the riverbank in a boat rowed by two drunk fisherman. They were ferrying people from the recently deoccupied territories across the river, since the bridge was still in ruins after being blown apart a month ago. Tatiana Velenteenko, an 18-year-old medical student, had left her home in Vovchyansk, by the Russian border, that morning, and was heading for the relative safety of Kharkiv, 40 miles away, after living under Russian occupation for half a year. “Some people collaborated with them,” she said. “They were giving co-ordinates of Ukrainian positions in return for doing business with the Russians. But those people all left to Russia when the Ukrainians came.”

The Ukrainian troops are taking no chances with civilians who stayed behind. Rumours abound of Russian soldiers who stripped off their uniform or put on civilian clothes during the hurried retreat, and melted into the local population.

To complicate matters further, some of the soldiers fighting for Russia in these areas were from the so-called Donetsk People’s Republic, and hold Ukrainian passports. “They think they can blend in, and it’s very hard to tell them apart sometimes,” said a soldier stationed to the north of Kharkiv, who did not want to give his name. “We caught one from the DPR at a checkpoint, and he’s with the intelligence now.”

Before leaving the liberated territories, each civilian is checked by Ukrainian security forces in a filtration process that, depending on the area, can take minutes or days.

In a bombed-out village ten miles from the Russian border Nina, 77, wept as she tried to flag down a car to take her to Kharkiv. The Russians had been pushed out of the area a week earlier, and she needed to buy medicine and food, she said, for herself, her son and their two dogs. “The occupation was terrible, I wouldn’t have wished it on my worst enemy,” she sobbed hysterically. “We were so scared, and we were so happy when the Ukrainians came, you can’t imagine. But now I need blood pressure medicine; I need to go.”

We gave her a lift towards Kharkiv. Yet as we approached a checkpoint on the city outskirts, police ordered her out of the car. Nearby, an unkempt man was crouched on the ground, his hands behind his back, as armed men questioned him. He wasn’t allowed to pass. And neither was Nina. “You haven’t been cleared,” barked one officer. “You need permission to go. We’ve told you before. Don’t try to trick us again.” They said they had already given her food and medicine.

The area where she lived lies in the thin band between the city of Kharkiv — before the war, a thriving hub for students and IT companies — and the Russian border 20 miles to the north. Here, in what has become a buffer zone between the Ukrainians and the Russians, there is little relief at the liberation. Almost everyone has fled, and only the bravest, or the most desperate, are venturing back to find out what remains of their homes.

“We came to see what there was, but there’s nothing,” said Nadia, who had come from Kharkiv, standing by the ruins of her holiday cottage. “It’s destroyed, everything is destroyed.”

In the village of Rubizhne, eight miles from Russia, the silence is stifling and ghostly; the only sounds the creaking of bent metal sheeting in the wind, and the scrabbling of stray dogs. No residents remain. The Russians who had been squatting in their houses, littering the ground with human faeces and green cardboard ration packs, were gone, too.

They had left behind a nest of deadly traps. On the front gate of one house, a team of sappers had spraypainted the word “mines” in capital letters. “They’re everywhere,” said Vladimir, 43, their commander. “They put them on the roads, in the houses, wherever. Some are well hidden and some are more obvious, so we have to look for them.”

Treading carefully, he walked back through the gate to show me the trip wire strung across the back garden. Even from a foot away, it took me a few seconds to see it in the gloom. On the road back towards Kharkiv, his team had been clearing armfuls of anti-tank mines, some of them daisy-chained together, that had been planted along the road. “The Russians used them for defences,” said Vova, 24, another de-miner. “But it was only their front line of defence that was good. Behind that they were just drinking and not doing anything. So when our guys pushed through the first lines then they ran away. Some of them didn’t even get in their vehicles, they ran on foot. They even left so much of their ammunition behind.”

The advance has slowed but is continuing. On Friday morning fighting raged in the frontline city of Kupyansk, a vital logistics hub 70 miles east of Kharkiv. Shells, ingoing and outgoing, exploded every few minutes with a deafening crack as Ukrainian and Russian forces fought over the city. Civilians, some weary, some openly terrified, dragged suitcases and plastic bags of belongings with them as they tried to find any way they could to leave. “We can’t get out of here, there are no buses,” said one older woman, who was holding her three-year-old granddaughter by the hand. A moment later, a shell screamed near by, and they shuffled into cover.

By that afternoon Ukrainians claimed to have pushed Russian forces out of the city, and locals were already adjusting to their new reality. Anya, a young blonde woman with dark eyebrows, had reopened the corner shop she ran with her family. The moment the liberating forces arrived in the area, she had swapped the prices on the cans of energy drink imported from Moscow and warm beer from Russian roubles to Ukrainian hryvnia.

For her it made little difference who was in charge. Back in Kharkiv, in the suburb of northern Saltivka, however, the full impact of the advance was impossible to ignore. The vast maze of Soviet-era apartment blocks had been relentlessly attacked over the last six months, whole buildings blown to a blackened twisted mess of rebar and glass by the shells and rockets being launched by Russian troops just a few miles away.

Now the evening air is quiet for the first time since February. While the Russians can still hit Kharkiv with missiles it is out of range of most of their guns, and there is, for the moment at least, less pressure on the city. For the civilians who stayed in Saltivka through the months of horror, it is a rare moment of release. As the sun began to set on Friday Rima, a 66-year-old woman with gold teeth, took a stroll with her friends through the communal garden between their homes. “It is so beautiful, we’re not scared any more,” she said. “Or at least, now I can sleep with only one eye open, not two. When the Russians are gone from Crimea, then we’ll really celebrate.”