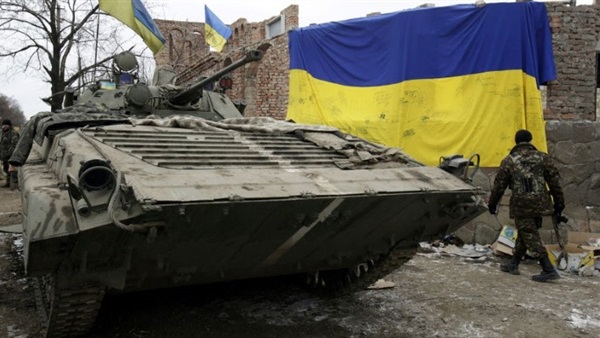 The men sat in the shade, flanked by bombed-out apartment blocks as they reminisced about their war. In late February, as a huge Russian military convoy advanced on Borodyanka, a town near Kyiv, Serhii Piven, a brawny Ukrainian lieutenant-colonel, headed up a small group of partisan fighters preparing to face down President Putin’s invading army.

Piven, head of the town’s military commissar’s office, had refused an order to withdraw and leave behind only a rearguard force. “I answered that I would not abandon the people,” he said. “This is my land and I wasn’t going to run away.”

He gathered about 45 fighters to defend Borodyanka and handed them each a Kalashnikov assault rifle. About half of them had never served in the army. Did they even know how to shoot a gun? “Roughly. The rest worked it out,” Piven said.

For the next day and a half, dressed mainly in tracksuits, Piven and his men took the battle to the Russian army, springing deadly ambushes and bolstering their firepower with grenade launchers and other weapons that they seized from their fallen foes. “We were the first serious resistance that they had faced,” he said. “They thought they would just parade into Kyiv.”

They destroyed about fifty tanks and armoured vehicles, buying the Ukrainian army vital time to strengthen its defensive positions around Kyiv. Seven of the partisans were killed before the group finally melted away into the surrounding forest.

“Our intelligence services told us later that they had intercepted Russian communications. They thought we were well-trained special forces,” Piven said. “It’s not that the Russians fought badly, just that we fought well. We know this area, we’ve lived here all our lives. We knew exactly where to engage them.”

As we sat in the town square they took out their smartphones and showed me images from the raging battle: dead Russian soldiers, burnt-out tanks, and streets strewn with the detritus of war. Yet the men, their faces etched with tiredness, admitted that their experiences have left them damaged psychologically. “The hairs on my arm are standing up even as I speak about this,” said Piven.

All say they have had trouble sleeping since the fighting in Borodyanka ended. Some have been diagnosed with post-traumatic stress disorder, a common ailment among soldiers who have seen front-line action.

“At first, I couldn’t sleep at all,” said Vitaly Shevchenko, a military analyst who had no battlefield experience before the invasion. “Now, I get by on four hours a night.”

They also say they have become more aggressive, inclined to flare up at the slightest hint of injustice, even within their families. “Before the war I could discuss things that annoyed me in a normal way,” Piven said. “Not anymore.” Some deal with the stress in their own way. “I want to shoot all the time,” said Viktor Romanchuk, another partisan fighter. “I spent a lot of time at the shooting range.”

Piven said his men have not been given any official papers certifying that they are suffering any long-term effects of the fighting. The lack of documents means they will not be entitled to free medical treatment in the future. “Something needs to be done,” he said. “They need to be able to prove that they fought here.”

There is also a sense of lingering resentment that not everyone in their home town appreciated their sacrifices. “Some people said to us, ‘why did you fight back? If you hadn’t offered resistance, then our houses would still be standing,’” Piven said, gesturing at the shattered remains of tower blocks. He shook his head. “A friend — well, a former friend now — said this to me and I replied: ‘Did you want your teenage daughter to be raped by six Russian soldiers? What about your wife?’”

Russia’s brutal invasion has traumatised a large swathe of the civilian population, and half of all Ukrainian families are believed to have been split up by the fighting. In Kyiv, refugees from Mariupol, the port city that was devastated by Russian bombing, receive food packages at aid centres. They can get professional assistance to try and help them cope with the horrors they have witnessed and their feelings of despair.

“They are afraid of loud noises, of talking to people. Those people who sat in basements for two or three months under shelling are constantly worried that they will run out of food,” said Anna Chasovnikova, a psychologist who also escaped the city. “Lots of people, those who have lost family members or homes, just don’t see any sense in going on.”

She told of a 64-year-old woman from Mariupol who fled to the relative safety of Kyiv, but later threw herself off the 15th floor of an apartment block after suffering from depression. “Before the war lots of people had a negative attitude towards psychologists, and they thought they could deal with their problems themselves. But now people realise that they need help.”

The proximity of Mariupol to Russia, whose border is barely 40 miles away, exacerbated the sense of shock for many residents, while the lack of empathy and concern shown by friends and relatives in Russia prompted feelings of confusion and hurt. “There was utter incomprehension that a neighbouring country could attack us like this,” Chasovnikova said. “My godmother in Moscow wrote to me at the start of the war: ‘don’t worry, our army is there to liberate you.’ But liberate me from what? My work, my life, my family?”

Back in Borodyanka, I asked Piven and his fellow fighters if they are haunted by the faces of the Russian soldiers that they killed at close range. “It’s not like in the films,” said Shevchenko. “I felt absolutely no emotions at all.” Others nodded in agreement.

“To be honest, I want them to come back again,” Piven said. “So I can kill more of them.”