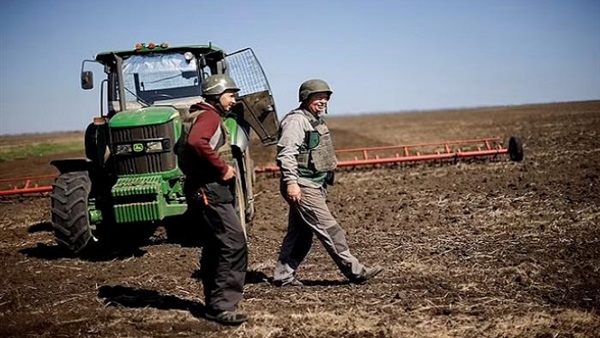 The fields are burning,” the farmer yelled in a panic.

He had been just days away from starting the harvest, but the Russian shelling came first — despite his modest farm’s distance from Ukraine’s southern front. In minutes, the flames threatened what was left of this year’s grain crop.

“That field was on fire. That one is burning. There it’s burning,” he said, giving only his first name, Viktor, as he paced back and forth on a patch of scorched earth. He pointed to neighboring plots of wheat as the rumble of outgoing artillery sounded in the distance. On the horizon, two more plumes of smoke rose.

Fires are the latest scourge that Viktor and other farmers face in the Mykolaiv region. With the planting season delayed by fighting to retake the area from occupying Russian forces, they must now choose between harvesting near an active front line or abandoning their crop. After months of war and the financial strain of Russia’s Black Sea blockade, a decision to let the wheat go could mean financial ruin.

“People need to get their grain,” said Viktor, a slight man of 57 years. “People must survive somehow.”

The havoc unleashed by the Russian invasion has prevented much of Ukraine’s grain from reaching global markets this year, slashing the output of one of the world’s largest producers and affecting food security worldwide. The country accounted for 10 percent of global wheat exports in 2021, according to the United Nations.

The flat steppe in the south — the feature that makes for such prime farmland — has only complicated the effort to oust Russian forces. Ukrainian fighters must maneuver through open fields with little natural camouflage and sparse hard cover.

In this section of the front line, the war remains a bloody stalemate. Ukrainian soldiers utilize what is left of the villages and tree lines during grueling artillery onslaughts. During daytime hours, their troop movements are limited by Russian drones used to track and correct outgoing artillery fire for maximum damage.

In Pervomaiske, only five miles from Russian military positions, waist-high grain waits in the fields. Ukrainian forces continue holding the town, which has been reduced mostly to rubble, amid the enemy’s ongoing attacks with S-300 surface-to-air missiles and artillery.

That Russian shelling has grown increasingly chaotic and random as Ukrainian forces reinforce their positions and prepare for what is expected to be a counteroffensive. Farmers and Ukrainian soldiers in the area report new fires daily, which continue to destroy fields and farming equipment.

Two Ukrainian fighters based in Pervomaiske talked Saturday about the extra danger that the increased use of cluster bombs and explosives poses in sun-parched farm fields. The men were part of the Ukrainian army’s 63rd Mechanized Brigade, the only presence left to extinguish the fires that result. The people who once lived in the villages fled long ago.

“We have to save the grain — in between shelling, our boys are running around to put out the flames,” said Vadim Chornii, the brigade’s deputy commander, whose forces have been fighting in the area since the war began in late February. He fears the Russians have shifted tactics, deliberately targeting farms to demoralize the region’s remaining population and create an artificial famine to force Ukraine’s capitulation.

The shelling has also destroyed critical agricultural infrastructure tied to the grain harvest. Damaged bridges and crater-pocked roads make it impossible to move grain out, while rail lines typically used to transport grain have stopped operating.

In the nearby village of Zasillya, recent fighting devastated a large flour mill and grain elevator used by farmers across the region. The facility’s silos, which once held up to 30,000 tons of grain, were reduced to smoldering ashes. Inside one of the storage areas, which last weekend was still being targeted by the Russian military, golden wheat flowed into the burning red embers of what had been a 20-foot-tall mound of grain.

And at a farming depot less than two miles from Russian military positions, a blast shredded three large tractors and damaged half a dozen grain wagons. Shrapnel eviscerated the roof of a grain silo the size of a football field. Nearby, a farmer plowed a small field burned a day earlier — barely a hundred yards from two charred tanks almost hidden by hay bales.

Rustem Zhafarya owns the property and uses the facility to store and service equipment needed to harvest the 3,300 hectares (8,154 acres) he leases. He has lost more than a tenth of his crops to fires, on top of the hundreds of thousands of dollars he spent buying seed and fuel at the start of the planting season.

“We feed the world, but today everything is shut down. We’re losing money,” he said.

The region’s few farmers who have escaped the shelling and fires still confront other perils. Cluster munitions used by both sides in the conflict have spread bomblets that are difficult to spot from inside the large harvesters cutting through knee-high wheat. Several farmers have already died after coming upon unexploded ordnance.

“Of course, it’s stressful,” said Serhii Fomin, 60, stopping briefly as he drove a combine through one of Viktor’s fields. “We must do it. Getting in the harvest is the most important thing right now.”

Fomin is a farmer from a neighboring village, who fled his home before harvesting a single grain from his own field. He is now part of a three-man crew helping Viktor.

It was early afternoon as the massive machine he rode pushed forward. Following closely was a wagon collecting a mixture of grain and ash.

The crew hopes to finish the field in coming days — if the fire and the fighting don’t stop them first. Yet with grain storage facilities filling up, farmers like Viktor are unsure about what comes next for their grain.