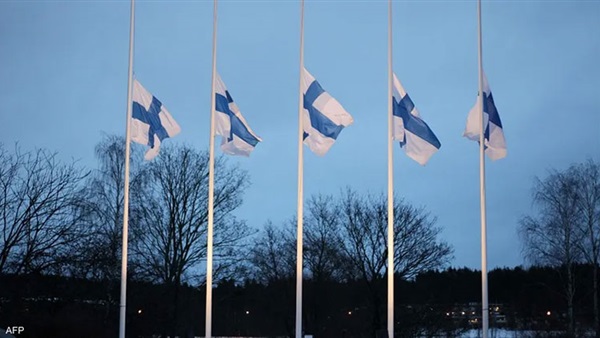 Finland has announced that it wants to join Nato “without delay”, paving the way for the alliance to expand during Russia’s war in Ukraine.

Boris Johnson pledged yesterday that British troops would defend Sweden and Finland in the event of a Russian invasion.

“Now that the moment of decision-making is near, we state our equal views, also for information to the parliamentary groups and parties,” President Niinisto of Finland and Sanna Marin, the prime minister, said in a joint statement. “Nato membership would strengthen Finland’s security.”

Best of TimesWe’ll send you our top stories, across all sections, straight to your inbox. Simple as that.One-click sign up.

“As a member of Nato, Finland would strengthen the entire defence alliance,” they said. “Finland must apply for Nato membership without delay. We hope that the national steps still needed to make this decision will be taken rapidly within the next few days.”

The Finnish parliament’s defence committee concluded today that Nato membership would be the “best option” for Finland’s security.

A large majority in Finland’s parliament backs membership and an opinion poll last week showed support in Finland for joining Nato was 76 per cent, with only 12 per cent against.

“It is 100 per cent certain that Finland will apply and quite likely that it will be a member by the end of the year,” Charly Salonius-Pasternak, a researcher at the Finnish Institute of International Affairs, told AFP before today’s announcement.

For Finland, the next step is for the president and ministerial committee on foreign and security policy — a body comprising the president, prime minister and up to six other cabinet ministers — to meet on Sunday.

The committee will make the formal decision for Finland to submit an application and the proposal will then be handed over to parliament.

After the alliance receives the official bid, lawmakers in all 30 Nato member states would need to ratify its application, a process that could take months.

Pekka Haavisto, the Finnish foreign minister, said yesterday that he believed Finland could be a full Nato member on October 1 “at the earliest”.

“The Nato secretary-general has said that this process will take between four and twelve months. My own impression is that it might be closer to four months than twelve months,” Haavisto said.

Russia said today that it would be forced to respond to Finland’s decision. Its foreign ministry said: “Finland joining Nato is a radical change in the country’s foreign policy. Russia will be forced to take retaliatory steps, both of a military-technical and other nature, in order to stop threats to its national security arising.”

Jens Stoltenberg, Nato’s secretary-general, said Finland would be “warmly welcomed” should it apply, adding that “the accession process would be smooth and swift”. “Finland is one of Nato’s closest partners, a mature democracy, a member of the European Union, and an important contributor to Euro-Atlantic security ... Finnish membership would demonstrate that Nato’s door is open, and that Finland decides its own future.”

Mette Frederiksen, the prime minister of Denmark, said her country would push for a quick Nato admission process for Finland.

“Denmark will of course warmly welcome Finland to Nato. [It] will strengthen Nato and our common security,” Frederiksen said on Twitter. “Denmark will do everything for a quick admission process after the formal application.”

Johnson became the first western leader to explicitly pledge military support to Sweden and Finland as he signed a mutual defence pact with the two countries on a visit to the region. He said that Britain would “very seriously” consider deploying nuclear weapons to protect the sovereignty of Sweden and Finland.

Sweden is also close to joining Nato after years of non-alignment. The debate there is more fraught but the invasion of Ukraine has given momentum to the pro-Nato wing of the country’s ruling Social Democrats.

Johnson said that the security agreements would “fortify Europe’s defences for generations to come” and denied that they were a “stopgap” until Finland and Sweden were covered by Nato’s Article 5, which stipulates that an attack on one country is an attack on all.

He accused President Putin of behaving like a “21st-century tyrant” with “neo-imperialist, revanchist ambitions” and he warned that Russia would continue to try to conquer its former territories if it was not pushed back from Ukraine.

“Just imagine the consequences, not just military or political, but economic, of further Russian aggression against any of the parts of the former Soviet Union,” he said. “It is to prevent that further catastrophe that it’s so important we are together strong now.”

Jukka Siukosaari, Finland’s top diplomat in London, said he expected the upcoming period to be “grey and potentially even risky”.

He told Times Radio Breakfast that Russia was not an imminent military threat for Finland. “Since the Russian attack to Ukraine, the situation in our border or close to our border actually has been quite peaceful and calm. Probably mainly because the bulk of the Russian resources are in the south.

“So in that sense, we are not concerned about our safety in the military sense. We are prepared for many different types of attempts to influence . . . in the hybrid sense, in the cyber sense, and possibly even violations of our airspace or our territorial waters.”

He said applying for Nato membership was about bolstering his country’s security. “The Russian attack on Ukraine proved that we cannot trust our neighbour, we can expect that they are willing to conduct also irrational moves, such as the attack on Ukraine wars. So therefore, we have to be ready and willing to maximise our own security.”

As part of the new security agreements, Britain will offer to increase the deployment of personnel and assets from the RAF, Royal Navy and army and deepen intelligence-sharing. It has stepped up its military operations in northern Europe after Putin’s decision to invade Ukraine. In March HMS Northumberland and HMS Richmond were sent to patrol the Baltic Sea, and ministers have doubled the number of troops stationed in Estonia, a Nato member, to 1,650.

Challenger 2 battle tanks were deployed to Finland for the first time last week for Exercise Arrow, a joint operation involving about 120 British troops from the Queen’s Royal Hussars. The RAF will take part in further joint exercises in Finland and Sweden this summer, The Times understands.

Finland has an 810-mile border with Russia and was part of Russia from the early 19th century until just after the October Revolution of 1917. During the Cold War it maintained a policy of neutrality at the same time as integrating its economy with the West and weaning itself off Soviet military hardware.

Sweden has never been part of Russia, but for long periods of its history it has been a rival power in the region. At one point the Swedish empire extended to the site of modern-day St Petersburg. Stockholm also held a position of neutrality during the Cold War, although like Finland it forged deep ties with the West and both countries became members of the European Union in 1995.

The Kremlin has also reacted angrily to the prospect of Sweden joining Nato, threatening nuclear escalation and troop reinforcements.

More than three quarters of Finns are in favour of joining Nato as are more than half of Swedes. Sweden and Finland are members of the Joint Expeditionary Force, a UK-led military alliance of Nordic states, and they have been Nato partners since 1994.

On his first leg of Wednesday’s trip, Johnson visited Sweden where he held talks with Magdalena Andersson, the prime minister, at her official country residence of Harpsund, 50 miles from Stockholm. Johnson rowed Andersson around the lake in a small boat while not wearing a lifejacket — a diplomatic tradition dating back more than 50 years.

Asked at a press conference whether the security agreement would mean Britain defending Sweden with nuclear weapons, Johnson said: “When it comes to our nuclear deterrent, that’s something we don’t generally comment upon, but what I’ve made clear is that it’s up to either party to make a request, and we take it very seriously.”

Johnson hailed Anglo-Swedish co-operation in developing weaponry that has proved so effective for Ukraine. Britain has given to Kyiv more than 5,000 Next Generation light anti-tank weapons, which are made by Thales, based in Northern Ireland, and Saab Bofors Dynamics, of Sweden.

Johnson flew on to Finland, where he had talks with Niinisto in Helsinki. Asked at a press conference there if he would commit British troops to defend Finland in the event of an invasion, he said: “Yes, we will come to each other’s assistance, including with military assistance.”

Antony Blinken, the US secretary of state, offered similar security guarantees in a closed-door meeting with the Swedish foreign minister last week in Washington.