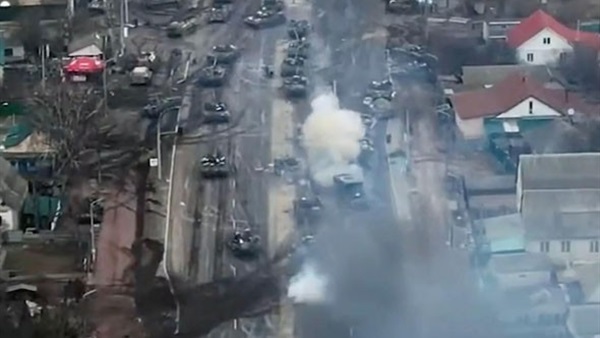 Up to 60 civilians are believed to have been killed in a Russian airstrike on a village school in eastern Ukraine as the country steels itself for a barrage of offensives to mark Moscow’s Victory Day parade today.

About 90 people had sought refuge in the school buildings at Bilohorivka, near the focal point of Russia’s redoubled onslaught on Donbas.

On Saturday the complex was hit by a bomb that started a fire that raged for four hours, according to Serhiy Gaidai, the governor of the Luhansk region.

By last night only 30 or so survivors had emerged from the ruins. “Unfortunately, the bodies of two people were found,” Gaidai wrote on Telegram, a social media app.

Since retreating from the north of Ukraine a month ago, Russia has poured its forces into Donbas, where its advance is slowing against relatively well-equipped Ukrainian fighters. Bilohorivka, on the border between the Donetsk and Luhansk regions, is on the edge of Ukrainian-held territory that has had some of the heaviest fighting.

Over the weekend the area came under intense Russian bombardment, with strikes on the nearby cities of Lysychansk and Sieverodonetsk.

The Ukrainians are bracing themselves to fend off intense attacks as the Kremlin tries to win a breakthrough in time for a vast annual military parade in Moscow today, commemorating the Soviet Union’s victory over Nazi Germany.

Denouncing Russia’s shelling of Ukrainian homes and the strike on the school, President Zelensky said in his nightly address: “Russia has forgotten everything that was important to the victors of the Second World War.” Although ordinary people associated the anniversary with peace and the slogan “Never again”, Russia was continuing its attacks, he added.

“As a result of the Russian airstrike on Bilohorivka of the Luhansk region, about 60 people were killed,” Zelensky said. “Civilians who simply hid in the school from the shelling. It was a targeted blow to the school. Another crime of the occupiers.”

The secretary-general of the United Nations said he was “appalled” at the reported attack. A UN spokesman said that Antonio Guterres “reiterates that civilians and civilian infrastructure must always be spared in times of war”.

A Ukrainian military official said that six missiles had hit the Black Sea port of Odessa, which tops the list of targets in Russia’s sights if it can conquer Donbas. Four rockets struck a factory and two landed on a runway, according to the Ukrainian authorities. It is unclear if there were any casualties.

The anniversary of the Third Reich’s surrender has also stirred up ghosts of the past in Germany, where pro and anti-Russian protesters marched through Berlin to mark the “day of liberation” from Nazi rule in May 1945. Hundreds from both sides gathered around the Soviet war memorial in the Tiergarten, where Berlin politicians have called for the two Red Army T-34 tanks to be removed from their plinths.

Andriy Melnyk, 46, the Ukrainian ambassador, was greeted with chants of “Nazis out” and Egon Krenz, 85, the last leader of socialist East Germany, was applauded by Kremlin supporters.

Fourteen hundred police officers formed protective cordons around 50 sites, including the Russian embassy on Unter den Linden. An explosive device was found in a building housing the Berlin bureau of Ria Novosti, a Russian state news agency. The Russian embassy described it as a “failed terror attack”.

The protesters in Berlin included 150 members of the Night Wolves, an ultra-nationalist Russian motorcycle gang, and 50 neo-Nazis backing the Azov battalion, a right-wing Ukrainian group.

The authorities banned the display of Ukrainian, Russian and Soviet flags, as well as the Russian Z emblem, from the areas around 15 monuments. This appeared to work and the protests remained peaceful. The decision infuriated Melnyk, however, who denounced it as scandalous and “a slap in the face of the Ukrainian people”.

Last night Olaf Scholz, the German chancellor, defended his handling of the war in Ukraine. His Social Democratic party revealed that it would drop its pledge to forge a “strategic partnership” between Russia and Europe, one of its central foreign policy tenets. The promise to “safeguard peace and stability” by binding Russia into Europe’s security architecture has stood in the party’s fundamental manifesto for 15 years.

Justin Trudeau, the Canadian prime minister, made an unannounced visit to Ukraine, where he said that President Putin was accountable for “heinous war crimes”.

He visited Irpin, a suburb on the northwest edge of Kyiv that saw heavy fighting at the start of the conflict. Oleksandr Markushyn, the local mayor, said that Trudeau “came to Irpin to see with his own eyes all the horror that the Russian occupiers had done to our city”.