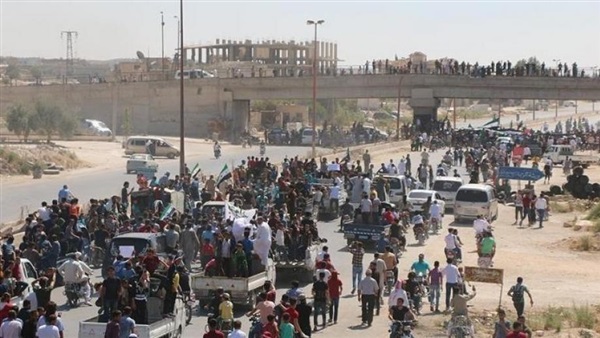 The United Nations described as a "human catastrophe" the displacement of thousands of people as a result of fighting between the Syrian army, on one hand, and al-Nusra Front and factions allied to Turkey, on the other, in the northern Syrian province of Idlib.

The UN said in December last year that this was the worst displacement crisis since the outbreak of the civil war in Syria in 2011.

By the end of 2019, the fighting caused over 700,000 people to flee the northern Syrian province.

The London-based Syrian Observatory for Human Rights documented the displacement of 40,000 civilians in the last 24 hours in January of 2020 in different areas of Idlib.

It said those forced to escape the province amounted to over 900,000 people.

More people are expected to flee the different cities and villages of the province in the coming period, according to footage acquired by The Reference.

Those living in the refugee camps in the province speak of untold suffering as a result of the suspension of aid for six months as more displaced people converge onto the camp.

"The civilians were not immune from shelling, which caused a massive wave of displacement," said Amar Abu Ahmed, one of thousands of displaced people living in a refugee camp on the border between Syria and Turkey.

He showed photos of people who were killed by the same shelling.

The killing of civilians, he said, has become a normal occurrence in the different cities of Idlib.

He said the area where his camp is located is the safest place in the whole of Idlib.

Everybody from the other villages of the province, he said, is coming here.

Abu Ahmed said displaced Syrians cannot find tents where they can spend the nights or protect themselves from the heat of the sun.

Some people sleep on the streets in the open and under the olive trees, Abu Ahmed said.