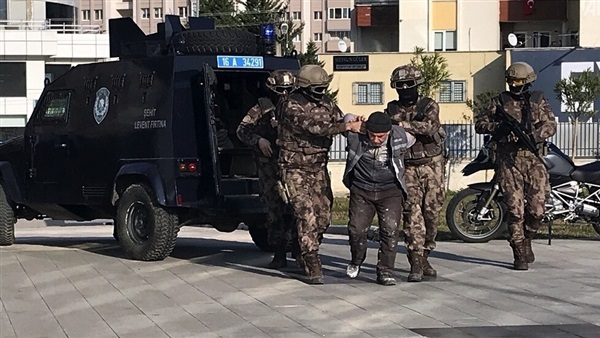 Turkish security forces have arrested a suspected former executioner for Daesh in Syria, who became a gas repairman when he returned to civilian life in Turkey, according to local media.

The 50-year-old Syrian, known by his nickname Abu Taqi Al-Shami, was arrested at a construction site in the Bursa province of northwest Turkey.

Reports described him as an executioner for a senior Daesh leader in the Deir Ezzor region of eastern Syria, a former stronghold of the extremist group.

It is alleged he is the same man appeared in a footage several years ago in Syria with a full beard, killing a civilian with a shot to the back of the head.

His arrest led to the detention of three others in Bursa on Tuesday over alleged Daesh links, Anadolu said.

He was born in 1970, in the Syrian city of Al-Mayadeen, in Deir Al-Zor Governorate. His real name is Youssef Amer Yousef Al-Marhoun, and he was nicknamed "Abu Hael". He was a former employee at the Furat Oil Company and secretary of the Baath Party division with the Assad regime.

"Al-Marhoun" appeared in one of the Daesh publications, which was titled "The Greatest Losers", and he was the one who executed the death sentence with bullets against Ahmed Abdullah from Al-Joura neighborhood, and Ahmed Rajab Falah and Khaled Mustafa Falah, from the Syrian Albukamal town.

Abu Taki Al-Shami is considered to be one of the top leaders in Daesh, due to his kinship relationship with the senior leader Saddam Al-Jamal “who is accused of burning the Jordanian pilot Muath Al-Kasasbeh”, helping him to reach the position of leading Al-Qa’im region in western Iraq, in addition to making him Emir of the security sector of the so-called caliphate.

In December 2017, the Al-Furat Center for Combating Terrorism obtained testimonies accusing "Al-Marhoun" of firing live bullets at demonstrators at the beginning of the Syrian uprising, in addition to unverified accounts that stated that he had beheaded a person with a sword, after a simple controversy occurred between them, and then hid his body in an unknown location.

And at the end of 2017, Al-Shami left the Syrian territories, and entered the Turkish city of Urfa, accompanied by his two sons Hail and Abdul Hamid, who were also members of the terrorist organization.