Arabs exporting their revolution to Iran; Tehran is losing control of demonstrators 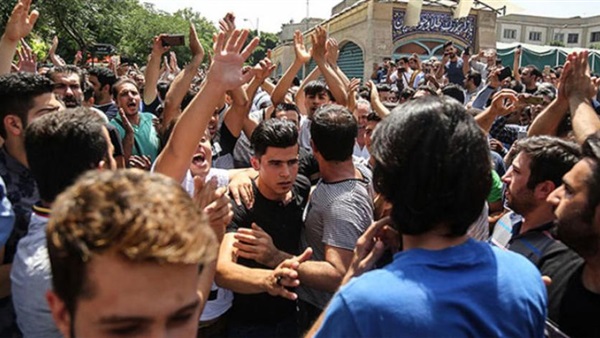 Arab demonstrators succeeded in exporting the revolution to Iran, which has always been the source of violence and chaos in the Arab countries, but this time the contrary broke out in Iraq and then spread to Lebanon and in both cases targeted symbols and militias affiliated to Tehran.

The Iranian demonstrations bore the hallmarks of their Arab counterparts, which flared up in Lebanon and Iraq, starting from the target point.

In the Arab countries, the protesters chanted against the Iranian regime's policy and refused to rule it in their country and demanded the departure of the regime, which is what happened in Iran. The people demanded the fall of the regime and declared their rejection of its policies.

The similarity extended to the protest mechanisms. Citizens resorted to blocking roads peacefully and raised banners showing their demands.

Similarly, governments 'mechanisms for cracking down on demonstrators are similar, as the mullahs' hands control their positions of power.

Violence has been used against demonstrators, the Internet, broadcast messages of treason, and protesters have been stigmatized as outsourced in each of the three countries.

According to the state-run IRNA news agency, Hossam Eddin Ashna, an adviser to the Iranian president, said on Saturday, November 16, 2019: “Iran is neither Iraq nor Lebanon; the US embassy in the country has been closed for several years. We Iranians will not allow the media to decide our fate.”

Although the government announced that the proceeds of increasing the price of gasoline will not enter the budget, but will be used to support the poor, but protesters have stepped up their demonstrations, accusing the regime of causing the widening gap between the rich and poor and its leaders plundering the country's wealth and dispel in fueling wars, supporting terrorist arms and buying the loyalty of outsiders.

Maryam Rajavi, head of the opposition Mujahedeen Khalq Organization, called on the masses of citizens to join the demonstrations; indicating that this is the only way to escape from poverty and disasters brought by the regime.

"The mullahs' regime, which has tripled fuel prices, has made the hard-working poorer and that all the economic joints of the country are in the hands of Khamenei, Rouhani and the embezzlers of billions of their entourage."

For his part, the researcher in the Iranian affairs Mohammad Abadi said that in a short period demonstrations broke out against corruption and lack of economic reform in Iraq, Lebanon and Iran.

He explained that the recent protests revealed how weak the impact of the Iranian regime's propaganda on its citizens and followers.