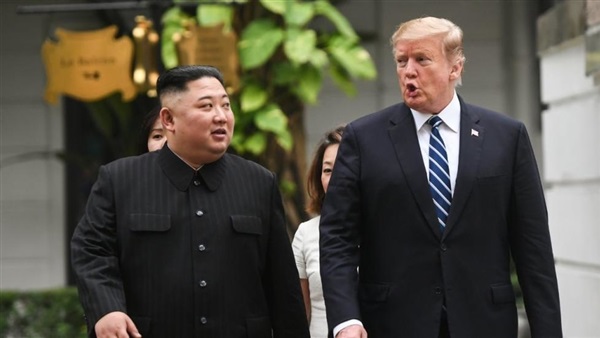 Donald Trump has come to the defence of one of his potential rivals for the presidency, telling North Korea its recent description of Joe Biden as a “rabid dog” that should be “beaten to death” was a little unfair.

Trump’s criticism of Pyongyang – albeit via a half-hearted endorsement of Biden’s character – came amid attempts to resurrect stalled nuclear talks, with Trump imploring North Korea’s leader, Kim Jong-un, to “get the deal done”, and the US and South Korea agreeing to postpone an annual air force drill the North routinely condemns as a rehearsal for an invasion.

“Joe Biden may be sleepy and very slow,” Trump said in a tweet on Sunday, using his nicknames for Biden, “but he is not a ‘rabid dog.’ He is actually somewhat better than that.”

On Friday, North Korea had accused Biden of having “the temerity to dare slander the dignity of the supreme leadership”, although the regime did not specify what he had said to provoke its angry response.

“Rabid dogs like Biden can hurt lots of people if they are allowed to run about,” a statement by the official KCNA news agency said. “They must be beaten to death with a stick.”

There was speculation that the North felt aggrieved over an ad by the Democratic presidential hopeful’s campaign condemning Trump’s foreign policy. The ad said that “dictators and tyrants are praised, our allies pushed aside,” and featured an image of Trump meeting Kim at their first summit in Singapore last year.

Trump’s tweet turned to the prospects of another meeting with Kim after the two leaders failed to agree on denuclearisation terms at their summit in Hanoi in February.

Addressing Kim as “Mr Chairman”, he said: “I am the only one who can get you where you have to be. You should act quickly, get the deal done. See you soon!”

Sunday’s decision to postpone US-South Korean air force drills, which would have involved an undisclosed number of US and South Korean aircraft, is being seen as an attempt to kickstart denuclearisation talks as the countries edge closer to an end-of-year deadline the North has set for Washington to come up with a mutually acceptable plan to salvage the dialogue.

The two sides have so far failed to bridge the gap over how far the North would have to go in dismantling its nuclear capability before the US reciprocated by easing sanctions.

The US defence secretary, Mark Esper, denied the indefinite postponement of the already scaled-down drills was a concession to Pyongyang.

Donald Trump and Kim Jong-un meet in June 2019. The pressure is on to agree some form of nuclear accord before the end of the year.

“I don’t see this as a concession. I see this as a good faith effort ... to enable peace,” he said in Bangkok on Sunday. “I think creating some more space for our diplomats to strike an agreement on the denuclearisation of the peninsula is very important.”

Pyongyang, however, reportedly held its own air force exercises over the weekend, KCNA said on Monday. It quoted Kim as saying the drills had to be held “without notice under the simulated conditions of real war” for “improving the preparedness” of the country’s military units.

Esper encouraged North Korea to “demonstrate the same goodwill as it considers decisions on conducting training, exercises and testing”.

Referring to the country’s official name the Democratic People’s Republic of Korea, he added: “We also urge the DPRK to return to the negotiating table without precondition or hesitation.”