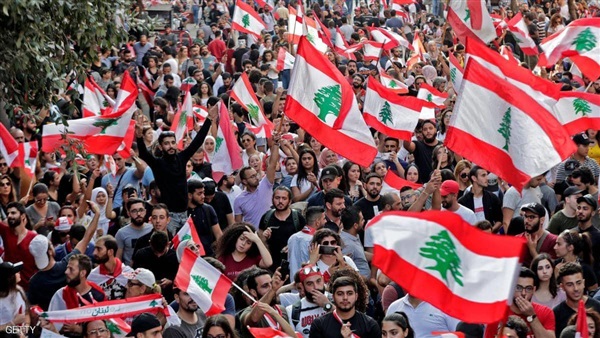 Protesters began gathering in Riad Al Solh Square in Beirut on Tuesday morning as nationwide demonstrations in Lebanon continued for the sixth day.

On Monday night, the first signs of potential sectarian tensions appeared as Hezbollah and Amal supporters on motorbikes drove to central Beirut and tried to disrupt the protests. However, they were pushed back by the Lebanese army, which has promised to protect protesters, and the disruption was limited.

Protesters have presented a united front and informally banned any symbols except for the Lebanese national flag and the flag of the Lebanese Armed Forces.

Earlier in the day the Lebanese government under Prime Minister Saad Hariri agreed a package of long-stalled reforms to try to ease an economic crisis and defuse the biggest protests against the ruling elite in decades. The cabinet approved a 2020 state budget that does not impose any new taxes on individuals and aims for a deficit of 0.6 percent of GDP, down from a previous target of around 7 percent.

The cabinet measures appeared to have little effect as protesters call for the overthrow of the entire government.

Protests began on Thursday, sparked by a proposed fee on WhatsApp calls and a raise in the price of cigarettes against a backdrop of widespread corruption, political deadlock, and a worsening economic situation including an alleged shortage of dollars.

The government is currently headed by Hariri but includes politicians from all the major political praties except for the Lebanese Forces, whose four ministers resigned on Saturday evening.

“These protests are unprecedented, since the creation of the great nation of Lebanon in 1920 ... The president [Michel Aoun] must draw lessons and act as the head of the state, not just of a faction,” added Siniora.

Siniora said that there needs to be an emphasis on respecting the Taif Accord, the political deal which marked the end of the Lebanese Civil War in 1989, because of the “internal imbalance in Lebanon.” The Taif agreement underpins many of the current political arrangements in Lebanon.

He also pointed to the need for economic growth and political reform in the country. “There is no cure for the economy in isolation from politics,” he said, adding that “Lebanon’s economic growth must be relaunched following years of deficit.”

“A large part of the Lebanese government’s decisions are stemming from the past and are late,” he added.

Earlier in the day, the leader of the Progressive Socialist Party, Walid Joumblatt, called for “lawful early elections which are non-sectarian.”