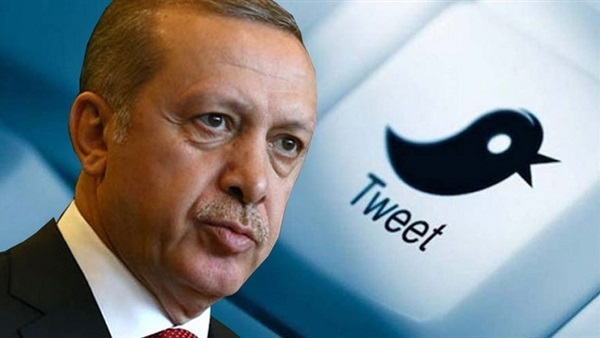 A tweet by Turkish President Recep Tayyip Erdogan, in which he announced the invasion of northeastern Syria on Wednesday, sparked a great controversy on the websites.

The tweet he posted on his official Twitter account revealed a great contradiction in the terminology used, and showed how the Turkish president manipulated his terminology to beat the "religious sectarian" tendency.

Erdogan rely on his Brotherhood ideology to convince his people and Arabs that he is leading a "semi-religious" campaign to secure the borders of the Turkish state from dangers of the Kurds, backed by America and the West, calling its army involved in the invasion of Syrian territory, the so-called Mohammadi Army. 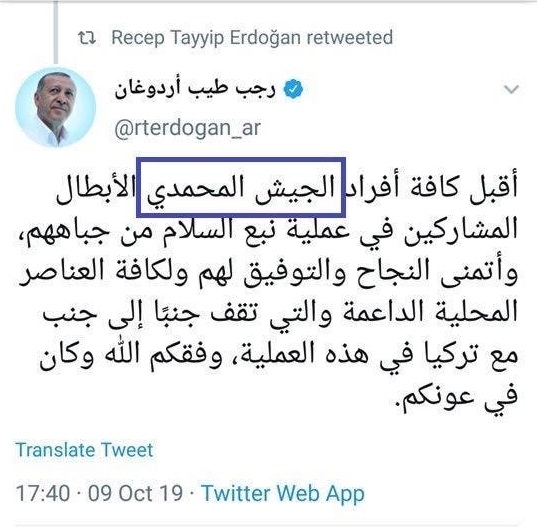 Erdogan said in an Arabic tweet, “I kiss all members of the Mohammadi army, involved in the process of peace spring from their foreheads, and I wish success to them and all the local supportive elements that stand side by side with Turkey in this process, God bless you and was in your help”.

He also used the same label in his tweet in the Turkish version. 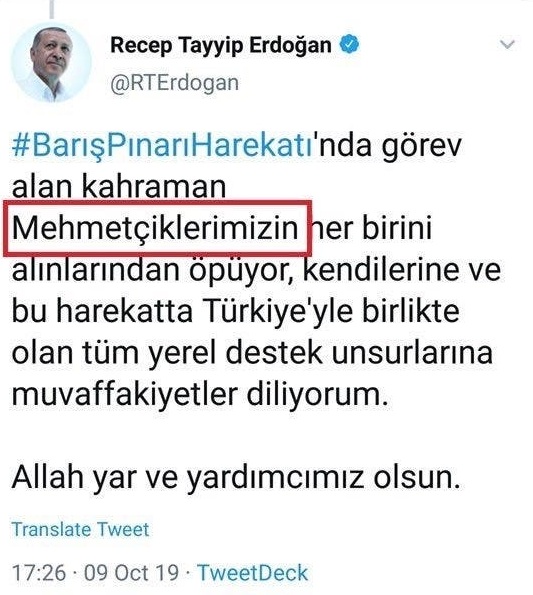 However, the irony was that the Turkish president did not use the term Mohammadi Army in his English tweet, and replaced it with “the word of the Turkish army”.

He knows that he addresses a completely different audience, and that the term may increase his troubles.

In his English tweet, he used the term “Syrian National Army,” a term chosen carefully because of the notoriety of pro-Ankara Syrian armed factions in the West. 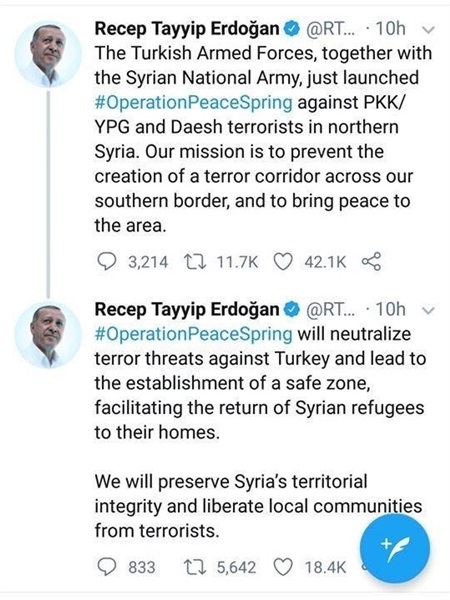 Is Erdogan an ideology fanatic or pragmatist?

Erdogan's ideological rhetoric aimed at mobilizing support for the Turks is shocking for the West, said researcher Eric Jean Zoucher.

"Over the past years, political circles and public opinion in Europe and the United States have been shocked by the way President Recep Tayyip Erdogan described the West as an enemy in speeches specifically addressed to the Turkish public," he said in an earlier article published by Ahwal al-Turki.

For Western policymakers and opinion leaders, who have been used to thinking of Turkey as a modern ally in the turbulent Middle East and in the post-Soviet world, it has been a shock.

"Is the anti-Western rhetoric by Erdogan a political tool to rally supporters in Turkey, to exert pressure on the West, or is it an expression of deep ideological conviction?"

This is not the first time that Erdogan calls this name the Turkish army, after the failed coup in 2016, Erdogan described the Turkish forces that did not participate in the coup attempt as "the army of Mohammed."

In parallel to the controversial tweet on the websites, the head of Turkish diplomacy appeared in military uniform.

A number of Turkish websites carried a picture of Turkish Foreign Minister Mevlut Caoşolu published on his Instagram account in military uniforms, shortly after the start of the Turkish offensive in northern Syria.

The Turkish media also saw in this appearance that Mevlut Caoşolu wanted to send a message of support to his country's army, which Erdogan described as "Mohammadi."

It is noteworthy that Wednesday's attack in northeastern Syria against the SDF is the third attack launched by Turkey with Syrian pro-Syrian factions in the north of Syria, after the first attack in 2016, which took control of several border cities, and the second in 2018, its impact on the area of ​​Afrin in northern Syria.