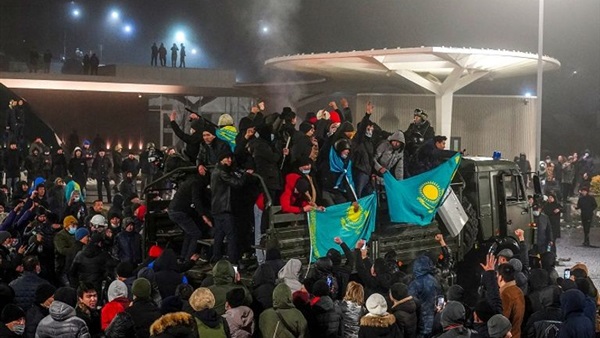 Kazakhstan is the world’s largest landlocked country — vast, sparsely populated, rich in oil, gas and minerals, and with the longest continuous land frontier on the globe. Now it is also in flames.

But it is not only its 7,000-kilometre border with Russia that is making Moscow nervous of the violence in Almaty and other cities: the turmoil threatens to destabilise Russia’s relations with all its former Soviet republics in central Asia, bring Islamist nationalism closer to Russia’s soft underbelly, worsen relations with China and jeopardise the future of the 3.5 million ethnic Russians living in Kazakhstan.

Little wonder that Moscow responded almost in panic to the plea by President Tokayev for help from the 30-year-old Collective Security Treaty Organisation (CTSO). By invoking for the first time its mutual aid clause and dispatching 3,000 troops to join the crackdown, Russia hopes the violence over fuel price rises, corruption and stultified rule can be contained.

If not, Moscow could face violent insurrections in three neighbours, as Kazakhstan joins Ukraine and Belarus in challenging its influence or trying to eject a despot kept in power by rigged polls.

This would not only exacerbate Russia’s already rock-bottom relations with the West, it would also undermine President Putin’s plan to step back from the presidency but to remain a Deng Xiaoping figure, pulling strings behind the scenes, just as Nursultan Nazarbayev, the former president, has done in Kazakhstan since stepping down three years ago after 29 years of absolute rule. Put not your trust in your successor, would be the lesson for Putin.

Until now Kazakhstan had been the richest, most stable and most pro-Russian central Asian republic. If the violence spreads, it will be the nationalists and Islamists, who had been well under control until now, who will benefit and demand change.

So far the population is not anti-Russian. More than half the country’s 19 million people speak Russian as their first language. The economies are closely tied, with Kazakhstan a key founding member of Moscow’s attempt to set up a common market with its former possessions. Strategic stability has protected Russia’s southern frontier.

But if the Russian troops are identified with repression, relations could sour quickly. Little wonder Moscow is blaming western agents for stirring up trouble. Little wonder Kremlin spokesmen are privately urging President Tokayev to be as ruthless as President Lukashenko in Belarus.