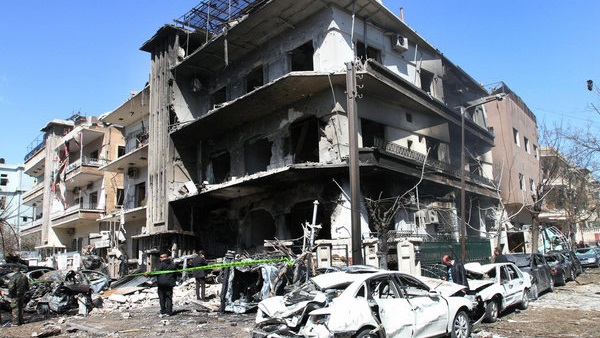 Hayat Tahrir al-Sham (HTS) welcomed the blessed Eid al-Adha holiday in the western countryside of Aleppo by launching missiles that caused the demolition of some houses and the displacement of those in them, under the pretext of pursuing fugitives, according to what was reported by the Syrian Arab News Agency (SANA).

SANA confirmed that two shells landed in the Shahba neighborhood northwest of Aleppo, where one fell on a residential building and the other landed inside a nearby school.

The two shells did not result in any casualties among the residents but caused material damage to one of the houses located in the targeted building.

SANA indicated that, during the last period, HTS elements carried out many violations and attacks against villages close to their areas of control in Aleppo.

HTS controls parts of the western countryside of Aleppo, extending to the countryside of Idlib, and these areas are often a launching point for its attacks against the Syrian National Army or to carry out shelling operations against the city of Aleppo, which witnessed several months ago a similar targeting of a number of its eastern neighborhoods.

Violations against the army

The Syrian Observatory for Human Rights published a report on violations by HTS members against soldiers and units of the Syrian National Army in Aleppo, confirming that HTS elements carried out ten various attacks during the month of June against the army, which resulted in the injury of about 30 soldiers.

The Observatory stated that it strikes are prohibited in that area according to the Sochi Agreement, but HTS has disregarded the laws.

It pointed out that every time HTS attacked soldiers, it publicly denied it.

Many houses in the western countryside of Aleppo were subjected to demolition and bombardment lately by HTS, whose members deliberately bombed houses with missiles under the pretext of harboring some of the fugitives from HTS trials, according to what they claimed and a report published by SANA.

Deformation of monuments in Idlib

According to a report by the General Directorate of Antiquities and Museums in Syria, HTS elements have stolen many antiquities from Aleppo governorate during the past five years.

About 227 antiquities in Aleppo have also been destroyed due to terrorist operations launched by HTS, including museums and the historical baths that were built in the early Islamic eras, in addition to the theft and looting of antiquities.

All funerary statues were also destroyed, in addition to the ancient city of Aleppo, which constitutes more than half the area of Aleppo, whose neighborhoods were completely demolished and leveled.