Israel and Hamas Scale Down the Conflict, Avoiding Another War 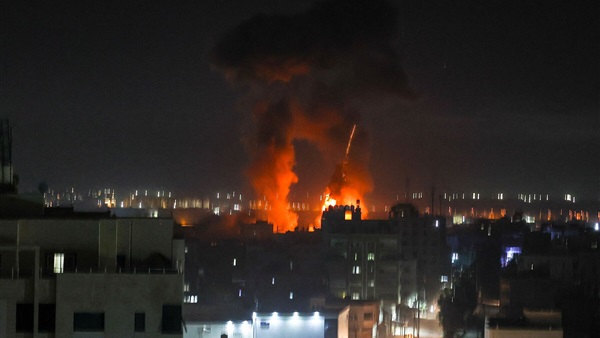 Each side had its reasons for taking military action this week, but it appeared that neither wanted to reopen last month’s war.

The stage was set this week for another spasm of violence between Hamas and Israel.

A provocative march was planned by far-right Israelis through Palestinian areas of Jerusalem, as it had been before the 11-day war last month. And Hamas threatened to respond with violence if the march took place, as it had in May.

But by Wednesday night, the likelihood of another full-blown air war had ebbed, at least for now.

The march went ahead, with dozens chanting “Death to Arabs,” but it was scaled down and rerouted to avoid some of the most volatile parts of the city. Hamas responded, not with rockets this time but with incendiary balloons, causing dozens of fires in the countryside of southern Israel. When Israel fired back, it struck several small-bore targets.

No casualties were reported on either side.

“Both sides really cannot help but do something,” Mr. Novik said. But both “must have calculated that it may not be worth it, so let’s do the least necessary,” he added. “Then we all go back home.”

The limited exchange suited both sides, allowing them to save face and project strength, while avoiding an escalation that would benefit neither the new Israeli government, less than a week into its term, nor Hamas, which has barely begun a billion-dollar reconstruction effort in Gaza.

By firing incendiary balloons, Hamas could still project itself as a defender of Jerusalem, without eliciting a major military assault from Israel. A Hamas spokesman said that forcing Israel to reroute the march constituted a “success in imposing new rules of engagement with the enemy.”

And by firing back, albeit in a limited way, the new Israeli government could still present itself as a stronger bulwark against Hamas than the one it had replaced. The former prime minister, Benjamin Netanyahu, tended to ignore incendiary balloons, while the new government, led by Naftali Bennett, quickly responded with airstrikes.

“We are bringing back deterrence,” tweeted Nir Orbach, a government lawmaker. “We are not surrendering to terror.”

Hamas also tried to project strength on Wednesday. Moussa Abu Marzouk, a senior member of Hamas’s political wing based in Qatar, said by phone that the group’s military leadership could still choose to escalate further.

“The issue of responding to the bombardment is on the table, but this decision is with the resistance,” Mr. Abu Marzouk said, referring to the group’s armed wing.

But behind the scenes, diplomats and analysts reported a different dynamic. International mediators had received indications from both Israel and Hamas that neither was seeking to escalate the conflict further, a diplomat involved in the talks said Wednesday.

A march planned by far-right Israelis through Palestinian areas of Jerusalem helped set off a war last month. It went ahead this week.

A march planned by far-right Israelis through Palestinian areas of Jerusalem helped set off a war last month. It went ahead this week.Credit...Dan Balilty for The New York Times

The bravado from both sides was, for now, largely for show, said Ghaith al-Omari, a former Palestinian official who is now an analyst at the Washington Institute for Near East Policy, a research group.

“The new Israeli government has no interest in starting its term with a war, and Hamas has been damaged enough,” he said. “And they know that the popularity that they won from the first war will probably erode if there’s another round so quickly after it.”

A deeper truce nevertheless remains more elusive, with Israel, Hamas, the Palestinian leadership in the occupied West Bank and international donors yet to agree on a mechanism to deliver aid, money and reconstruction materials to rebuild Gaza, which was heavily damaged in the recent conflict.

“This is still a work in progress with more to be done,” said Tor Wennesland, the United Nations special coordinator for the Middle East peace process.

A Palestinian protester threw a burning projectile toward Israeli forces during a demonstration east of Gaza City, on the border with Israel, on Tuesday.

The conflict in May, which began when Hamas fired rockets at Jerusalem, killed more than 250 Palestinians and 13 Israeli residents, according to the United Nations.

But while diplomats say some reconstruction material has begun to enter Gaza through Egypt, Israel has limited imports through its crossing points to humanitarian goods such as medicine, fuel and food, pending a longer-term agreement. It has also blocked financial aid from Qatar; before the war, the Gulf country sent about $30 million a month to help stabilize Gaza’s economy.

Exports from Gaza have also been paused since the start of the war, crippling businesses that rely on Israeli markets to stay afloat. Hassan Shehada, the owner of a clothes factory in Gaza City, estimated that he had lost several hundred thousand dollars in sales after Israel blocked the export of approximately 30,000 items to Israeli wholesalers.

“It would have been better if the factory had been hit by airstrikes so we would have gotten compensation,” he said in an interview.

Up to 8,500 Gaza residents remain homeless, according to the United Nations. Eighty were sheltering in a U.N.-run school in Gaza City on Wednesday, sleeping in classrooms and scrubbing themselves with wet cloths because of a lack of showers.

“For us the war is still going on,” said Harb Sukkar, a 30-year-old former security guard now living with his wife and four children in Classroom No. 2 of the Shati Elementary School.

“We don’t feel there is a truce,” said Aisha Sukkar, his wife. “Our house is destroyed, and we are still homeless.”

About one in five of those sheltering at the school were experiencing post-traumatic stress disorder, the school management said. Dozens were descended from families that had lost their homes during the 1948 Arab-Israeli war, which they said compounded their sense of loss.

“It feels like history is repeating itself,” said Muhammad Gharbain, a 36-year-old scrap collector now living with his family in Classroom No. 7. But he and others blamed not only Israel for his situation, but also the Palestinian leadership.

“Hamas, Fatah, the Israelis — I blame them all,” Ms. Sukkar said. “The Hamas officials, every war they run away while leaving their people to die.”

Prospects of a reconstruction deal and full-scale cease-fire are also complicated by a disagreement on whether to include a prisoner swap in the arrangement. Israel wants Hamas to return two missing Israelis believed to be held captive in Gaza and the remains of two Israeli soldiers. Hamas seeks the release of Palestinian prisoners inside Israeli jails.