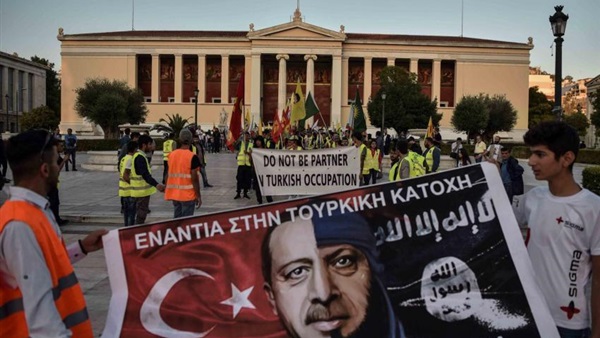 On the occasion of the anniversary of the Turkish file being reviewed before the United Nations Human Rights Council within the framework of the universal periodic review process, the Maat Foundation for Peace, Development and Human Rights issued a new report entitled “One year after the review process: The Turkish government is ignoring its pledges to the United Nations”, which monitors and documents the human rights situation in Turkey.

The report, of which the Reference received a copy, focused on the most important indicators and patterns of human rights violations committed by the Turkish authorities during the past year.

The report indicated that Ankara underwent the review process for the third time on January 28, 2020, and received a total of 321 recommendations, of which 21 were rejected, 215 were accepted, and 85 others were noted.

Despite this, the Turkish government did not fulfill its pledges to advance basic rights and freedoms. On the contrary, it imposed an almost complete nationalization of freedom of opinion and expression, as political opponents and opinion activists were imprisoned on charges related to combating terrorism, and fair trials were not provided to them.

This period also coincided with the Turkish government showing a lesser approach to cooperation with international mechanisms, in addition to continuing to shirk its commitments and sign international humanitarian treaties, as well as the failure to take effective measures with regard to strengthening human rights institutions, which contributed to the consolidation of a repressive environment in which perpetrators of violations enjoy the policy of impunity.

In 99 points, the report monitored the deterioration of the human rights situation in Turkey significantly, as the Turks remain under the oppressive grip of the government of Turkish President Recep Tayyip Erdogan. As such, tens of thousands of government critics, including journalists and human rights activists, are still imprisoned on politically motivated charges under the pretext and cover of countering terrorism.

The Turkish government continued its retaliatory attack on independent human rights organizations and defenders, as well as the almost daily smear campaigns and incitement to hatred, violence and sometimes killing, while the security forces used excessive force on several occasions against demonstrators. These cases often go unpunished and the Turkish government continues to prosecute people, investigate them for exercising their legitimate right to peaceful expression, and refer them to Turkish courts.

Ayman Aqil, head of the Maat Foundation, said that the Turkish authorities have struck down all the recommendations that were presented to them by the UN Human Rights Council. During the past year, many legislations were issued that undermine human rights and restrict basic freedoms, in addition to the arbitrary arrest and detention of citizens in isolation from the outside world, without legal representation, as well as besieging opposition and independent voices and closing all channels and outlets for free expression, in addition to intimidating and arresting media professionals and civil society activists for their work. The Turkish president also announced his desire to amend the constitution in order to tighten his grip on what remains of the public domain.

Aqil added that the repressive environment of Erdogan's regime contributed to creating a policy of intimidation against journalists and human rights activists, and this comes in conjunction with the continuing legalization of violations by issuing laws restricting freedom of opinion and expression such as the Social Media Law, which was issued by the Turkish government in July 2020, as well as the passing of a law last December that would eliminate civil society.

Likewise, the policies of repression and oppression that the Turkish government resorted to continued, as members of the Turkish opposition were prosecuted on false and broad charges.

The report stated that the Turkish government has systematically failed to prevent violence against women, as the rates have increased in an alarming way, especially since Turkey ranks 130th out of 153 countries in the Gender Equality Index for the year 2020. Religious and ethnic minorities also continue to face systematic discrimination in Turkey.

For his part, Sherif Abdel Hamid, Director of the Research and Studies Unit at the Maat Foundation, said that the human rights situation in Turkey has deteriorated in recent years in a way that the country has not witnessed in its modern history, as violations have increased and the perpetrators have enjoyed complete impunity. The policy of intimidation has taken hold against those expressing opinions or participating in the public sphere, and the state has adopted torture against citizens to extract confessions, as more than 1,855 people were subjected to torture inside prisons during the year 2020, of whom 38 died.

Abdel Hamid added that during the year 2020, the Turkish government tended to restrict freedom of opinion and expression, especially freedom of the press, as at least 48 journalists were arrested on various charges, including for insulting the president. He added that Turkey ranks 154th out of 180 countries in the World Press Freedom Index Report 2020, and it ranks second in terms of the number of journalists arrested in the world, after China.