Turkey accused of selling stolen Syrian olive oil as its own 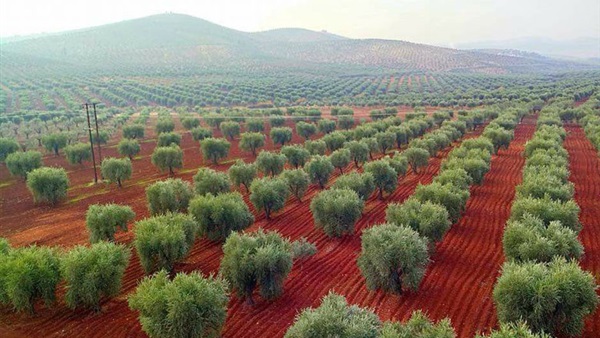 The government of Turkey has been accused of stealing olives from neighboring Syria, pressing them into oil and selling that oil to European Union countries, including Spain, labeled as Turkish olive oil.

These revelations came to light after an exhaustive investigative report from Spanish newspaper El Público, Turkish government documents obtained and published by Firat News Agency (ANF), observations from the United Kingdom-based Syrian Observatory for Human Rights and information seen by a Swiss politician.

The Syrian Observatory learned that thousands of olive oil tanks were stolen from olive compressors in the Afrin countryside, by factions operating in the ‘Olive Branch’ operation, and they were sold in several markets.

- Syrian Observatory for Human Rights observer based in Afrin

“In Turkish-occupied Afrin, the olive groves are being pillaged by both Turkish forces and the militias they support,” Bernhard Guhl, a Swiss Member of Parliament (MP) from the country’s Conservative Democratic Party, said. “The olives they steal have been sold to Spain, and the sale will continue.”

Turkey invaded the northwestern Syrian province of Aleppo, in which Afrin is located, in January 2018 in an effort to protect its interests in the region. Known, as Operation Olive Branch, the effort was meant to help stabilize the region, but many in the area say that Turkey is exploiting Afrin for economic gain. Turkey is the third largest exporter of olive oil to the European Union, after Tunisia and Morocco.

Saleh Ibo, the Agricultural Council Deputy Chairperson for the district of Afrin, told AFN that Turkey has made at least $80 million from the seized Syrian olives.

“They have also been confiscating the fields and olive groves of people who have had to flee Afrin due to the Turkish state violence in the months since the invasion,” he said. “We can say that 80 percent of the olives in Afrin are being taken to Turkey with no cost through the [paramilitary groups] and the councils they formed.”

According to local sources who spoke with El Público, the Syrian olives are pressed in local mills that have been taken over by these paramilitary groups. The resulting oil is then transported over the border to Turkey where it is blended with and labeled as Turkish olive oil, before it is then sent on to European Union countries, something that has been made much easier after a recent trade deal was signed between the two.

This information has not been confirmed independently by Olive Oil Times. However, it lines up with what sources for the Syrian Observatory for Human Rights have seen on the ground in Afrin. The group monitors human rights abuses in the country, which is entering its ninth year of civil war.

“The Syrian Observatory learned that thousands of olive oil tanks were stolen from olive compressors in Afrin countryside, by factions operating in the ‘Olive Branch’ operation, and they were sold in several markets,” the Observatory said in a statement on its website.

“The Syrian Observatory for Human Rights monitored the confiscation of thousands of olive oil tanks and the olive harvest, and the cutting of hundreds of trees to be sold as firewood,” the statement continued.

According to interviews conducted with Turkish sources by El Público and the documents released by ANF, at least 5,000 tons of olive oil have been produced in this manner, which in today’s market is worth about $80 million. The same figure that Ibo estimated.

Of the $80 million, as much as $22 million has been returned to the various paramilitary groups and councils, which have been working with Turkey to maintain control of the region. Local sources believe that Turkey and these allies are preparing to continue this process in the future.

While Turkey has not formally acknowledged these accusations, Bekir Pakdemirli, the Turkish Minister of Agriculture, told state media late last year that the government would be confiscating olives grown in the region in order to prevent them from being processed and sold by the Kurdish forces that previously occupied the area.

Turkey views the Kurds, who are spread across Turkey, Syria as well as Iraq and have been seeking an independent state of their own for the past 70 years, as various terrorist organizations. The Kurds have been staunch U.S. allies in the fight against the so-called Islamic State.

A Turkish board member for the International Olive Council and a board member of the Aegean Exporters Association both declined to comment on this story. The Turkish Olive and Olive Oil Producers Association did not respond to multiple requests for comment.

Meanwhile, in Spain there has been no formal comments on these revelations by the National Association of Industrial Packers and Edible Oil Refiners (Anierac) nor the Spanish Association of the Olive Oil Exporting Industry and Commerce (Asoliva).

However, Luis Escalante, who runs the small Andalusian olive oil company Aurum, told El Público that he had received suspicious sales solicitations from Turkey recently. Escalante has purchased olive oil from the Middle East for many years and said that nothing like this has happened before.

“Only a few days ago an export company from Adana called Ozcelic Trading contacted us to offer us oil, and the truth is that this is not the usual thing,” Escalante said. Adana is located two hours away from the Syrian border.

Spain is seen as an ideal destination for Turkish olive oil, particularly fraudulent oil, because such large amounts are imported and exported each year that it is hard for customs agents to check all of it.

“It is not surprising that the Turks have resorted to Spain,” Escalante said.

He points out those Spanish companies also have been known to re-export oil from Tunisia and Morocco labeled as Spanish olive oil. Last year, DCoop was criticized for importing and exporting practices pertaining to olive oil acquired in Morocco.

“Nor is it unlikely that there are Spanish companies involved in these illegal activities because in our country there is a long tradition of importing oils from countries like Tunisia, to be marketed later as their own to third countries,” Escalante said.

Guhl, the Swiss MP, said now that awareness of this type of fraud is increasing, it is imperative that European Union countries work together to stop it.

“It doesn’t matter if the final destination is Spain or Germany,” he said. “I believe that it is very important that the country or countries concerned launch a criminal investigation to determine whether companies are trading stolen olives or olive oil.”

At the time of writing, no criminal investigation had yet been launched by Spanish or European authorities.