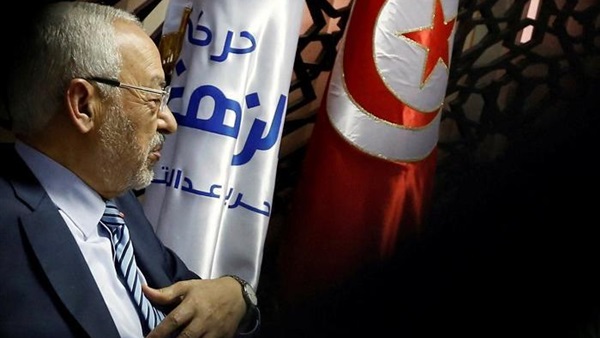 Tunisia’s Ennahda movement is experiencing a critical moment against the background of current leader Rached Ghannouchi's insistence on continuing in his position despite the end of his term in accordance with the movement’s bylaws, which brings to question whether it is possible to imagine Ennahda without Ghannouchi, who considers himself its historical leader, and what the movement's situation will be if its leadership changes.

The Ennahda movement does not have an independent face and does not make political movements without Ghannouchi, whose absence will affect the existence of the movement, Yahyaoui said, adding, “We will have before us a new party with a new vision and leadership,” he said.

Yahyaoui explained that Ghannouchi is playing on the time factor to gain the confidence of his supporters at the international level, as he wants to arrange his cards at the internal and external levels.

However, Ennahda's relations with the rest of the parties will not be affected by Ghannouchi's candidacy or non-candidacy, as it is expected that some members will defect and form a parallel party to the movement if Ghannouchi runs again to head the movement, Yahyaoui added.

Ghannouchi is fighting an internal war to end his term, while he clings to his legitimacy as a religious and historical leader that the movement has been associated with since its beginning.

As a religious organization par excellence, opponents of Ghannouchi resorted to the religious side to fight him. Lotfi Zaitoun, a former minister and political advisor to Ghannouchi, criticized Ghannouchi for his stance on the file of the offensive drawings of the Prophet Muhammad (peace and blessings be upon him) as he met with the French ambassador in Tunis, describing the crisis as "transient and marginal events."

Those who oppose Ghannouchi's presence used this incident to withdraw from him the religious status that surrounds him and gain legitimacy for his leadership of the movement.

This reveals the opposition to Ghannouchi’s opposition to the issue of insulting the Messenger in their political confrontation, which was demonstrated by Tunisian writer Mukhtar Dababi in an article entitled “Islamists and Democracy: The Impossible Combination” in the London-based Alarab newspaper on the traditionalism of Ennahda as a Brotherhood movement.

Dababi cited the fact that both Ghannouchi's opponents and supporters resort to the old Brotherhood rhetoric with the narcotic ideological tinge of the Ansar in order to justify the survival of the “historical leadership”, or demonize opponents and consider the difference as a departure from the unity of the ranks and feeding discord, which is “worse than killing.”