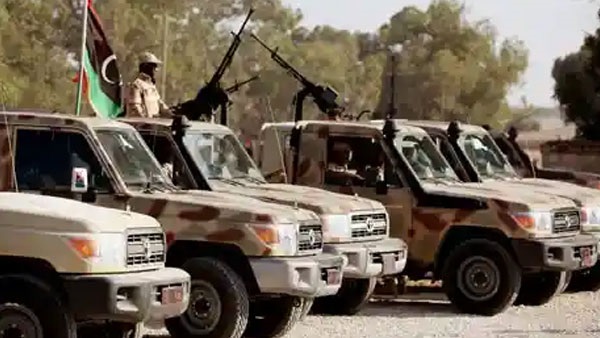 The Western Region of Libya, specifically the capital Tripoli where the Government of National Accord (GNA) led by Fayez al-Sarraj is located, has become a battleground, turning the area into a state of insecurity, as the Sarraj government has become unable to tighten its grip and restrain the militants, who entered into a stage of settling scores between themselves.

There have been intensive attempts by the Misrata militias to control the political and military decision-making of the entire Tripoli region, and a relentless effort by the GNA militias to establish the National Guard in Tripoli, in addition to warlords' demands for diplomatic posts and a decision not to prosecute in exchange for abandoning their militias and moving to reside in other countries where they have deposited their vast wealth accumulated in recent years.

Tensions have increased dramatically between the militants, threatening armed confrontations or assassinations, following the withdrawal of the Libyan National Army (LNA) from the cities of the Western Region, and disputes have erupted between the militias over areas of influence.

The conflicts did not stop at imposing hegemony and control, but rather they entered the stage of assassinations between the militants in Tripoli. Many militia members were assassinated in Tripoli, including Hossam Abdullah Al-Hamrouni, who was killed by a barrage of bullets fired by armed men in a civilian car, and Ayman Saleh (also known as Balah), the field leader of the pro-Turkish Rahbat al-Duru’ militia who was killed in Tajoura by unknown armed men. A state of tension has spread throughout Rahbat al-Duru’, and its members have vowed to retaliate for the killing of Balah.

Prior to the assassination of Balah, a number of gunmen belonging to a militia in Misrata killed two and wounded a third belonging to the Abu Salim Brigade, while the Farouq Brigade arrested one of the most prominent local leaders of the Brotherhood who supported the Turkish interference, Salah Hammad, after the attack on his home near Zawiya.

LNA spokesman Major General Ahmed al-Mesmari said that the conflicts between militias in the country’s west reveals the dangers threatening civil peace and confirms the correctness of the LNA’s position calling for the disbanding of militias and collecting their weapons.

The militias do not abide by the law and do not recognize the concept of the state, Mesmari said, adding that they are overwhelmingly terrorists, mercenaries and criminals involved in cases that require a trial.

At the same time, there is external pressure on the GNA to get rid of the armed militias stationed in western Libya, which prompted the GNA Interior Minister Fathi Bashagha to strengthen the militias in his hometown of Misrata, in an attempt to impose a new political and military fait accompli in the country’s west, which was rejected by the militias in Tripoli and Zawiya, as they have political and military ambitions in the country.

The GNA seeks to gather all its terrorist militias under one banner that it commands, but the proposal has found no support except from the sultans of terrorism in Ankara seeking to implement their scheme over Libya, in an attempt by Turkish President Recep Tayyip Erdogan to transform these militias into an army in order to save and legitimize the GNA by arming it from the militias, similar to the Iranian Revolutionary Guard Corps (IRGC) and the Iraqi Popular Mobilization Forces (PMF).

According to the Turkish plan, planned National Guard is formed as a military force that reports directly to Sarraj, with Tripoli as its main headquarters and financial allocations independent from any other military entity. Its main tasks are to secure presidential and leadership headquarters and guard vital targets, including land, sea and airports.

The GNA says that the National Guard is against “any danger threatening the civil democratic state,” which is a loose expression that indicates the possibility of exploiting it for specific desires of the GNA and its allied militias, since only armies are responsible for protecting the state and its democracy.

The establishment of the Libyan National Guard was announced in Tripoli on February 9, 2017, in a statement delivered by the then-commander of the new apparatus, Brigadier General Mahmoud Al-Zigal. The statement affirmed that the National Guard is a national institution far from political disputes, defining its tasks as limited to combating terrorism and protecting state institutions, state embassies, diplomatic missions, borders and vital installations, as well as limiting weapons proliferation and working to support efforts to build a professional Libyan army.

The criminal formation of the National Guard being worked on by Turkey is not new, as it was originally a Qatari proposal that Doha pressed for during the era of former National Transitional Council Chairman Mustafa Abdul Jalil, although it did not receive support at the time. Abdul Jalil had said in September 2011, “I visited Doha, and Emir Hamad bin Khalifa Al Thani offered me the idea of ​​establishing the guard. I went back and presented it to the members of the Transitional Council, but they refused it despite the efforts of the Qatari Chief of Staff to convince us of it, with the exception of five members of the council, including Muhammad al-Harizi, Abdelrazzak al-Aradi, Al-Amin Belhaj, and three others belonging to the Brotherhood. They insisted on implementing the idea.”

Abdul Jalil indicated that the former head of the executive office, Mahmoud Jibril, was the one who came up with the idea of integrating extremists into the National Transitional Council, which he insisted upon strongly.

Meanwhile, in December 2016, the National Salvation Government headed by Khalifa al-Ghawil announced the formation of a national guard that would include extremist militias following the terrorist ideology of al-Qaeda. However, international and regional parties rejected this idea due to the presence of militants.

Russia’s Navalny accuses Putin of being behind poisoning